Locked inventory spaces for the Relic Altar can be unlocked by completing various rooms or floors in the Forbidden Sanctum.

Templar Relics are a type of item that is exclusive to the Sanctum league. They can be placed in the Relic Altar to provide buffs to various mechanics related to the Forbidden Sanctum.

Sanctified Relics are a type of item that is exclusive to the Sanctum league. Sanctified Relics are special Relics that provide more general modifiers to the character, and have effect even outside of the Forbidden Sanctum. They are marked with an orange glow behind the item's art. They can be placed in the Relic Altar to provide stats to the character directly both inside and outside the Sanctum.

3.20.0b Patch Notes: Relics are now able to be dropped onto the ground by players, though these still remain Account-bound to the player that dropped them.

3.20.1b Patch Notes: Added an error message for attempting to change your Relics while you have an active Sanctum.

As you explore the Sanctum, you’ll discover a Relic Altar. 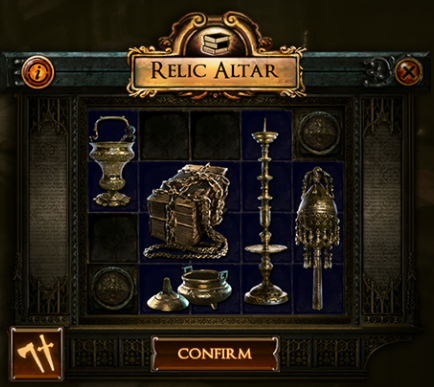 Templar Relics can be placed on the Relic Altar. These relics make you more powerful in the Sanctum and persist from run to run. Their continued power is the key to making it deeper into the Sanctum’s vaults each time you enter. As you accumulate more relics, you’ll need to make decisions around which ones most benefit you and arrange the Altar accordingly.

Sanctified Relics: Place these items on the Relic Altar to affect your character

You may also uncover Sanctified Relics, a very rare type that directly affects your character’s build. You may use only one of these, but its benefits stay with you beyond the Sanctum walls and bestow the Templars’ power on you as you journey through Wraeclast.

Do Sanctified Relics affect my character outside of the Sanctum?

Yes, the benefits of Sanctified Relics affect you everywhere.

How rare are Sanctified Relics? Will I only see one throughout my playthrough of the league?

As you start to master the Sanctum at high levels, you'll accumulate more Sanctified Relics to pick between when trying to find the perfect one for your build.

Is the Relic Altar shared between your characters or per character?

They're shared between your characters within a league. However, if you're currently using a relic in a Sanctum run on one character, it can't be moved until the run ends.

Is your Sanctum run shared between characters? i.e. can you run different rooms of your run with different characters?

Each of your characters has its own Sanctum runs and progress within them.