A group of new NBA 2K21 Dynamic Duos arrived at MyTeam. It includes some of the historical superstars in the game as well as the current ones. Special cards allow MyTeam players to pair two specific players to upgrade their cards. New stars revealed include Russell Westbrook, Magic Johnson, Larry Bird, Wilt Chamberlain, and Zion Williamson. 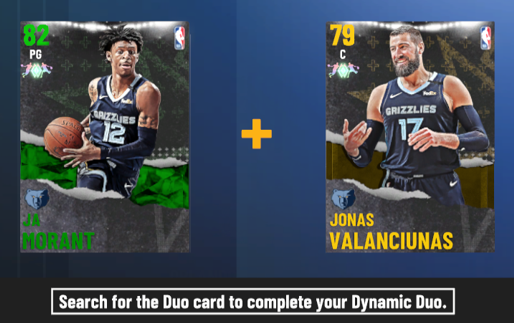 The NBA season may not be over yet, but rookies Ja Morant and Zion Williamson prove the bright future of the league. Both players will represent members of the new NBA 2K21 dynamic duos team, which has been released on May 4. Players need to pair Zion Moments Pink Diamond with Lonzo Ball’s Opal Flash series to upgrade their brand.

For Ja Morant, this means pairing his Spotlight Sim card with Jaren Jackson Jr.’s Moments card. In this way, Ja’s card can enter the Galaxy Opal, and Jaren’s card can become a Pink Diamond with a higher rating.

The above table lists a complete list of all paired players and their upgrade cards.

As mentioned before, you need two player cards (as shown in the above list) to upgrade on MyTeam. However, there are some good upgrades available for gamers, who may already have one of two players in MyTeam.

The features of Dynamic Duos

In NBA 2K21, Dynamic Duos allows two players to receive an in-game boost, provided that the two are real-life teammates in the NBA. Because of this feature, it’s a good bet you will want some teammates to pair alongside each other in MyTeam.

The way these cards work is that when the two players’ cards are paired up it can boost one of them. This means you can’t just put the two players on the same team and get the boosted stats and attributes. They have to be on the court together in order to get the boosts. This gives the feature a positive and negative gameplay aspect as you may only like using one half of the Dynamic Duo.