Complete each of the following tasks with the help of the Forsaken Masters: Delve to depth 250.

A delve is the exploration of the infinite Azurite Mine dungeon, released in the Delve league. The character guides a Crawler (mine cart) powered by Voltaxic Sulphite through the mines to a checkpoint.

Players can start delving from act 4 onwards, when they start encountering Niko, Master of the Depths. 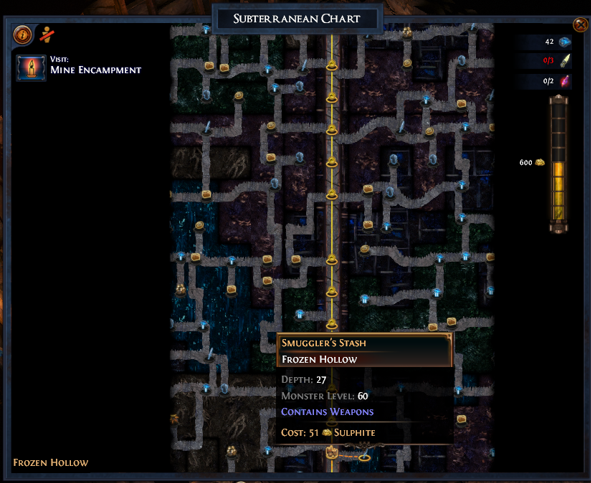 you need to keep in mind, that nodes only can have 1,3 or 4 connections. (Niko's mine shaft break this rule, but he only dig to depth 73 or so)

If it only have 2 connections - there is fractured wall (FW) lead to one of unconnected nodes.

Sometimes we can get generation bug, when dead-end node actually could have FW to unconnected room, but it's pretty rare.

life gain on hit pretty good, because it can heal you in darkness, when you can't do damage = can't leech normally.

"%Phys taken as %element instead" pretty good against hits, since you usually have no phys% reduction and have 75% elemental resists.

Use phasing effects to not be body-blocked by monsters. Quartz flask good for this.

For "Strong box" room bring currency with you, you can't simply go back to stash tab.

For "azurite" rooms watch out for orb-monsters exploding with projectiles on death.

For "Bear skeleton" encounter - watch out for his auto-attack.

4. What Depth Should I Stop At?

Since Delving is technically an infinite system, this question can only be answered by your build. Most builds will struggle to continue past Depth 300+ without dying occasionally, due to the severity of certain biomes. If experience and profit are your main priorities, it is best to stop between Depths 250—300. This allows you to easily farm level 83 monsters and encounter all possible biomes and bosses, but remain relatively safe and risk-free. Simply proceed laterally across the Subterranean Chart, but do not be afraid to deviate upwards or downwards as necessary to chase the most desirable biomes and rewards.