Uul-Netol’s Embrace is a unique Vaal Axe. This unique axe was rebalanced in the Path of Exile: Harvest.

A Breach-exclusive unique upgraded by defeating the mighty Breachlord Uul-Netol should be suitably intimidating, but the build-around potential of Uul-Netol’s Embrace was always hampered by not being able to trigger its signature Bone Nova against strong enemies. So we’ve changed it so that it now also triggers at the location of the enemy you hit, instead of firing from the player’s location (and will still hit the enemy you triggered it from!). 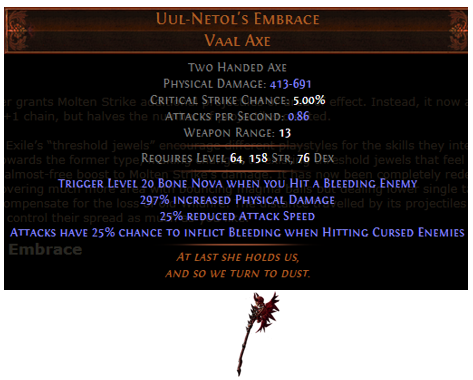 This axe can be acquired through the following upgrade paths or vendor recipes: