Defeat Preethi, Eye-Pecker in Desert Map while you are Bleeding

Defeat Preethi, Eye-Pecker in Desert Map while you are Bleeding is a PoE Challenge: Complete these Encounters III.

Bleeding is an ailment that deals physical damage over time to the affected target. Moving targets suffer increased bleeding damage. Only physical damage hit can inflict bleed. As of current build of the game, all chance to bleed are grant to the weapon as local mod, or the chance is specific to the attack. Thus, bleed is limited to attack skill only at the moment. 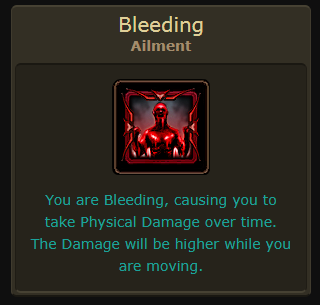