PoE Heist Challenge: Defeat Piety in The Lunaris Temple Level 2 while wearing a Sapphire Ring and a Topaz Ring.

Piety of Theopolis, better known as simply Piety, is a major character in the storyline and a boss in Act 3 (the Lunaris Temple) and in Act 4 (the Belly of the Beast) as Piety, the Abomination.

Defeating Piety is the objective of the quest Piety's Pets. You obtain the Tower Key when you kill her, thus allowing entry to the Sceptre of God. She returns in Act 4, and after being defeated again, she offers the quest Corpus Malachus and helps in the fight against Malachai, The Nightmare. 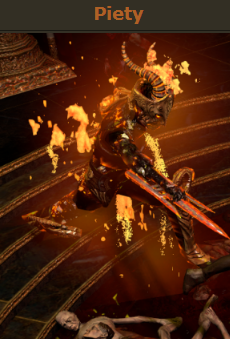 2. Talk to Grigor in Town for a reward

The first fight with Piety takes place in the Crematorium where Piety can be found surrounded by several Blackguards. It is advised to draw out the Blackguards first and then proceed to attack Piety. Piety uses a wide range of Lightning spells during the fight so lightning resist is important in order to survive her attacks. When Piety's health drops to half she breaks off the battle to open a portal, leaving you victorious. While she can still be damaged after reaching half health, she cannot be killed.

When the player enters in a portal located in a large elevated dais in the Lunaris Temple Level 2 he or she is teleported to a separate circle-shaped boss room where Piety waits. Players are advised to create a town portal for flask recharging and emergencies before confronting Piety in the opposite side of the area.

Upon reaching Piety, she taunts the player and produces the first burning and chilling portals. During the fight Piety changes between three different forms by running to these portals; in human form she casts powerful lightning spells, in the Fire form (Burning Portals) she rushes to attack the player in melee, dealing heavy damage, and in the Ice Archer form (Chilling Portals) she shoots out multiple ice arrows dealing cold damage to the player. Thus it is recommended for the player to be capped in each of the three elemental resistances.

Generally the Ice Archer form is considered to be the most dangerous of the three, and most players decide to take cover behind the poles and corpse piles, waiting her to transform back to human form. It is believed that these phases are timed; so when she turns back to human form, that is the best time to deal some damage. Players who have enough defenses can also engage the Fire form if they so choose. It should also be noted that when in melee form she seems to focus on mainly one target so when in a party, those playing a ranged character can score a few hits on her. From time to time she also summons few miscreations and blood elementals to serve as distraction, and more importantly as a way for the player to recharge flasks if need be.

Piety reappears as "Piety, the Abomination" at the end of The Belly of the Beast Level 2 in Act 4. She summons corrupted lightning balls and casts a lightning beam rotating in a circle. Her lightning beam deals physical as well as lightning damage.