Tiles contain packs of monsters with one Unique named "Effigy of X", based on existing Unique Monsters from Acts or Invasion bosses. Defeating around 95% of the tile's monsters spawns a Submerged Chest with random rewards that scales with difficulty.

Tiles contain various encounters from other Challenge Leagues, including Extra Content and Masters. The encounter's respective rewards scale with difficulty.

Each level of Difficulty increases the number of Artifacts dropped. The Unique Boss always drops a stack of Reroll Currency.

Each level of Difficulty increases the base duration of Shrine buffs on players.

Each level of Difficulty increases the chance for Essence Monoliths to contain additional Essences.

Each level of Difficulty increases the quantity of Timeless Splinters dropped.

Each level of Difficulty increases the chance to double dropped rewards and Catalysts. Cannot drop an itemized Organ.

Each level of Difficulty increases the quantity of Currency Shards dropped from Harbingers.

Each level of Difficulty increases the quantity of Sulphite obtained from Voltaxic Sulphite deposits. The T2 node grants a decent amount of Azurite.

Each level of Difficulty increases the quantity of Tainted Currency dropped. The tile contains many rats that have a chance to spawn a Beyond Portal, up until a Beyond Boss is generated. Does not guarantee a Beyond Boss.

Adds a Mirror of Delirium which temporarily covers the Lake in Delirium fog. Does not appear to scale with Difficulty.

Each level of Difficulty increases the experience granted by monsters in this tile. Similar to Untainted Paradise.

Spawns a Fisherman NPC and contains an interactable Tackle Box which contains a fishing-related Unique item.

Each level of Difficulty increases the magnitude of modifiers Reflected by the Ethereal Reflecting Mist.

Boss reflections are higher tier versions of Monster Reflections that spawns one or more Unique Bosses, including Rogue Exiles and Map Bosses. Can spawn Map Bosses of maps that are not currently on the Atlas.

Every area and map in Kalandra League contains a Mirrored Tablet altar used for constructing your Lake of Kalandra. Each Tablet allows you to place 1-2 Reflections (tiles) on the Lake, and completely filling it allows you to run it and reap the rewards you've worked for.

Reflection tiles may appear with 2-4 notches on the hexagon borders; these indicate a higher tier encounter. Tiles also scale in difficulty based on their Manhattan distance in the shortest route from the entrance to the reflection. Difficulty scales monster damage and damage reduction, as well as rewards.

The farther away from the Lake’s entrance an encounter is, the greater its difficulty and rewards are. You’ll occasionally be offered choices to customise your Mirrored Tablet by swapping the layout around, perfecting your set of encounters and their rewards.

As you progress through the league, you’ll unlock special abilities to skip, reroll and exile choices you are offered, letting you refine your Tablets more efficiently. In the endgame, you’ll also be able to itemise your completed Tablets to save them for later or trade them away. 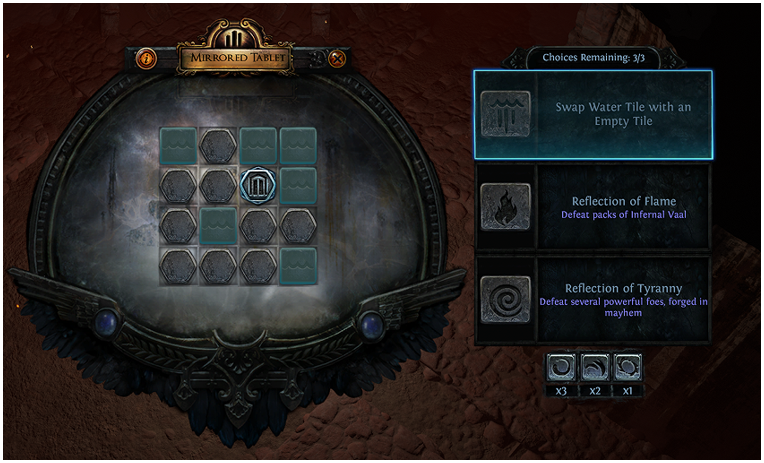 Once you reach maps, you'll be able to itemise your Mirrored Tablets, so that they don't have to be played immediately. They can be stored for later or traded with other players.

The farther away from the Lake's entrance an encounter is, the greater its difficulty and rewards are. You'll occasionally be offered choices to customise your Mirrored Tablet by swapping the layout around, perfecting your set of encounters and their rewards.

Swap Entrance with an Empty Tile

As you push farther out onto the lake shrouded waters, you will find each encounter to be more difficult but more rewarding. This difficulty value counts up by one for each location away from the entrance the encounter is.

Players wanting the best rewards will try to engineer tablets that have long, winding strings of encounters, reaching very high difficulty values by the end.

To do this, there are occasional options that can be chosen which allow you to move and swap the entrance, reflections, and water tiles on the tablet. The following is an example. 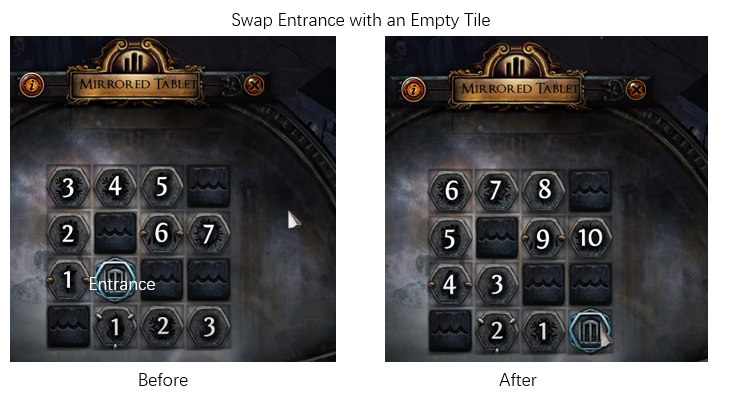 As you progress through the league, you'll unlock special abilities to skip, reroll and exile choices you are offered, letting you refine your Tablets more efficiently. In the endgame, you'll also be able to itemise your completed Tablets to save them for later or trade them away.

As you travel throughout Wraeclast, you’ll occasionally discover a Mirrored Tablet. Build up this Tablet by placing reflections of dangerous encounters at specific locations. Be careful though, some of these reflections contain immense challenges.

Once you have assigned a reflection to every empty location on your Tablet, you may open a portal to the Lake of Kalandra, which will manifest your creation for you to experience.