Kill Izaro in the Eternal Labyrinth 100

The following three new Eternal Labyrinth actually count as 2 kills per run for this challenge. Therefore, you can only run 50 trials.

Note: You must have completed the six different Trials of Ascendancy found in Maps in order to access this area.

Izaro is assisted by the Goddess of Justice, which attacks independently from Izaro. 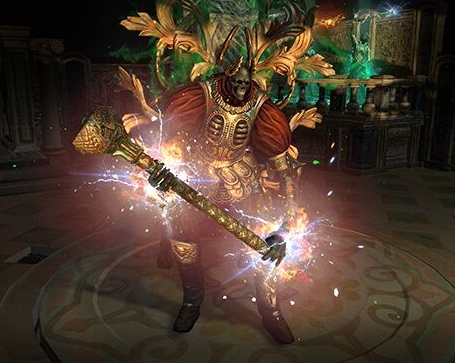 The first two encounters with Izaro add new mechanics to the fight that carry on to the next encounter(s). The mechanics change daily alongside the layout of The Labyrinth. Izaro will be encountered in a room containing three small holes in the ground that will introduce the additional mechanics for that particular fight. A Forbidden Reliquary room contains a Labyrinth

Trinket which makes the mechanics easier to deal with.

Any mechanics that have not been dealt with will carry over for the subsequent fights. However, leaving the mechanics untouched (Ex. don’t destroy any portals, have all three idols activate, don’t activate any charge disruptors, etc.) will result in Izaro dropping an additional Treasure Key on death.

Three statues, one for each element, are located in each corner of the room. While active, the statues provide Izaro with increased damage, added damage, and resistance to the corresponding element. The statues can be clicked to deactivate them for a short time.

If the player possesses a Cube Of Absorption, they will disable the first conduit they click permanently. Any statues active when Izaro is defeated continue to provide their benefits through any remaining encounters. If the player brings Izaro to the next phase while all conduits are active, the player is qualified for an additional Treasure Key drop. Conduits still underground count as active when the phase ends.

“Complex machinations converge to a single act of power.”

Izaro will gain charges throughout the encounter, granting him bonuses to damage, speed, and defense. Izaro can have a maximum of 10 charges on him. Charges can be removed by activating one of three Charge Disruptors. Each Charge Disruptor can only be used once. When Izaro has 10 charges he will say “Behold the machinery at maximum efficiency!”.

If the player possesses Cogs of Disruption, the first Charge Disruptor you use will reactivate shortly afterwards, allowing one additional use. Any charges active when Izaro is defeated will persist permanently for any remaining encounters. Not activating any Charge Disruptors and leaving Izaro at maximum charges at the end of the fight will qualify for an additional Treasure Key drop.

“The essence of an empire must be shared equally amongst all of its citizens.”

Three elemental essences, Burning Essence, Freezing Essence and Crackling Essence, that take the form of Golems will join the fight one after another. After rising out of the floor, they will slowly walk towards Izaro, attempting to bond with him. These golems can be killed during this period. If they touch Izaro, they will disappear and confer their bonuses to him for the remainder of the fight, which persists for future encounters. Each golem grants additional damage, resistance, and chance of applying a status ailment of their respective element.

If the player possesses a Orb of Elemental Dispersion, the first essence the player damages will be instantly killed. Any essence that is not killed will confer its bonuses to Izaro for the remaining fights and returns as an enemy, but will attack the player instead of attempting to bond with Izaro. Having all three essences bond with Izaro or remain alive when the trial ends will qualify for an additional Treasure Key drop.

“Some things that slumber should never be awoken.”‘

Izaro will summon three gargoyles to join him in the fight. Each gargoyle initially starts inactive and has an extremely high amount of damage reduction, making it very difficult to kill. When a gargoyle activates it will lose its damage reduction and channel a beam, indicating which gargoyle has activated. Each gargoyle grants different bonuses to Izaro:

After the gargoyle finishes channeling, it will become mobile and attack the player. Once a gargoyle is killed, Izaro will lose his bonuses from the respective gargoyle.

If the player possesses a Heart of the Gargoyle, the first gargoyle the player damages will be instantly killed. Any gargoyles that are left alive will permanently confer its bonuses to Izaro and returns in remaining fights as enemies. Leaving all three gargoyles alive will qualify for an additional Treasure Key drop.

Three Idols will spawn in each corner, one for each element. These Idols start with minimum Life and cannot die. Each Idol will slowly regenerate Life over time. Once they reach full Life, the idol will cast Fire/Ice/Lightning Beacon, creating multiple delayed explosion in random areas that deals elemental damage (the same explosions as Flame/Frost/Storm Bearers Bloodlines enemies), then return to minimum Life.

If the player possesses a Sand of Eternity, the first Idol a player attacks will not regenerate life. If an idol has activated at least once, it will return in the remaining fights in an unreachable area. Having all three idols activate at least once will qualify for an additional Treasure Key drop.

“An emperor is only as efficient as those he commands.”

If the player possesses a

Bane of the Loyal, the first Lieutenant the player damages will be instantly killed. Any Lieutenants left alive will return in the remaining fights. Leaving all three Lieutenants alive will qualify for an additional Treasure Key drop. Lieutenants still underground count as alive when the phase ends.

“The Emperor beckons, and the world attends.”

Three portals will spawn in each corner, one at a time. Each portal continuously summons Skeletal Mages of a specific element. Once the portal is destroyed, it will stop spawning skeletons.

If the player possesses a Portal Shredder, the first portal the player damages will be instantly destroyed. Any portal left intact will return in the remaining fights. Leaving all three portals intact will qualify for an additional Treasure Key drop. Portals still underground count as alive when the phase ends.

“It is the sovereign who empowers the sceptre. Not the other way round.”

Three fonts will spawn in each corner, one at a time. Each font casts a curse on the player. Font of

Elemental Weakness. Fonts can be damaged, and when destroyed they cast an empowered version of its curse on the player for 10 seconds. The curses cast by the fonts are affected by curse removal and immunity effects.

If the player possesses a Rod of Detonation, the first font the player damages will be instantly destroyed. Any fonts left intact will return in the remaining fights. Leaving all three fonts intact will qualify for an additional Treasure Key drop. Fonts still underground count as alive when the phase ends.

The third and final mechanic will add two different Labyrinth traps (plus sentinel traps in Endgame Labyrinth) to the room the encounter takes place in (not during normal). On Cruel and higher difficulties, Izaro’s Goddess of Justice can use Teleport, casting a green circle around Izaro, which teleports the player after a delay into a trap-filled area.