Firestorm now calls down a large meteor that impacts the targeted location, followed by a series of smaller impacts at set intervals over the storm’s duration. The base power of the spell has been significantly raised, so you are now limited to three Firestorms at any given time (any new storms created will replace the oldest). 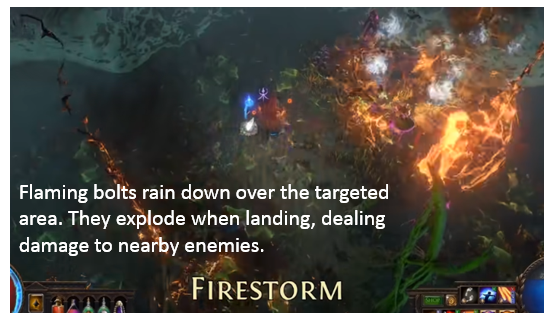 A classic Path of Exile spell, Firestorm has been reworked to give it more powerful visuals, more reliable area coverage and a greater reward for casting fewer, more powerful Firestorms. It is now a level 28 skill, increased from level 12. Firestorm now calls down a single, powerful meteor followed by a smaller ongoing storm of fire over a duration. It now has a limit on how many ongoing storms can be active at once, so you can call down as many meteors as you’d like but can’t stack up the ongoing fire storms by extending their duration and triggering or casting the skill rapidly. This has allowed us to greatly increase the area of each impact and the overall damage per cast (and improves performance).