The image shows the Arcade Map, in Normal, Magic and Rare rarities. 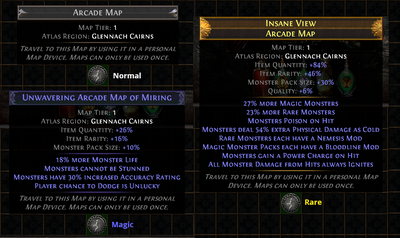 There are 3 tiers of maps, indicated by the color on the map icon. White maps are the most common and cheap. Yellow maps are more expensive. Red maps are the most valuable, and are the hardest to run and the most rewarding. When you run maps you'll automatically get a chance at obtaining maps of the next tier. 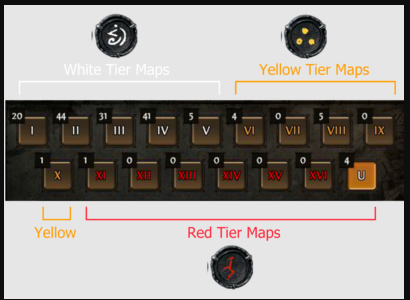 To obtain maximum map drops within a map:

Tip: To obtain 20% map quality you need to use 20 Cartographer's Chisels for Rare maps. However for Normal maps only 4 chisels are used to reach 20% quality. So remember to scour your map using an Orb of Scouring before using chisels.

Most Atlas mechanics have been reworked with a goal of creating deeper systems that are easier to understand. Regions have been removed, so your Atlas specialisation affects every map you run. Where you'd previously collect 16 Watchstones, you must now earn four Voidstones which let you raise the tier of all maps on your Atlas until they are uniformly tier 16. Sextants can apply to Voidstones and be itemised and traded. Commander Kirac offers a large variety of Atlas objectives that add valuable content to your maps.

Divination Cards and the Atlas Rotations

Change drop locations of many Divination Cards to drop in a specific thematically-linked list of areas. A few will drop in slightly fewer locations because of this change. Make sure every divination card that drops in maps will always have a map on the Atlas that drops it.

Reduce the number of corpses Tolman, The Exhumer, is able to explode at once and add a visual effect wind-up to the skill.