Energy Blade transforms your melee weapons into energy blades. A large portion of your energy shield is converted into the lightning damage that these blades deal.

This opens up an entirely new melee energy shield archetype, where you want to stack as much energy shield as possible to get the most powerful blades you can. Conveniently, the defences rework in this expansion is very compatible with this plan. 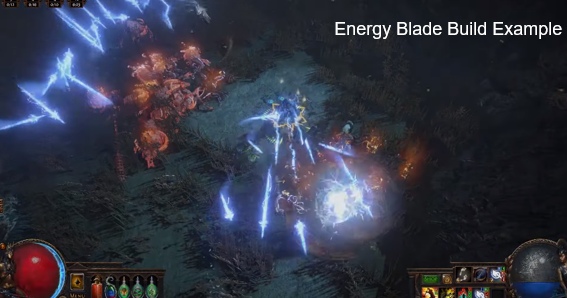 How to choose weapons for Energy Blade?

It requires a Non-Bow weapon. You may choose one of these weapons: Sceptres, Maces, Axes, Swords, Claws, Daggers, Staves, Wands, or Fishing Rods.

The best weapon is a Two Handed Non-Bow weapon.

Energy Blade can be purchased from Clarissa by the Templar, Shadow, Witch and Scion after completing Lost in Love.

Energy shield is a form of defence that acts as an additional hit point pool on top of life. Along with armour and evasion, energy shield is one of the three defence types that can implicitly appear on equipment. Unlike life, energy shield will recharge naturally after the character has not taken any damage for 2 seconds.

Every class starts with no energy shield, and gains 2% increased maximum energy shield every 10 intelligence.