In Diablo II, as in real life, death is something you should strive to avoid. If your Hit Points drop to zero during the game, you have died.

Press the Esc key after dying to restart in town. Your corpse will remain in the place where you died. You will have to return to your corpse in order to retrieve your gear and items. When you find your corpse, left-click on it to pick up and re-equip your gear and items (hint: when you are near your corpse, it will appear as a purple “X” on your Automap). Make sure you have room in your inventory to pick up all the items on your corpse, though — if you don’t, any items you can’t hold will remain on your old corpse. Be sure to collect any gold you might have dropped when you died, too.

If your character has no corpse when he dies, one will be created, and your equipped items will remain on that corpse. If your character already has a corpse, another corpse (up to a maximum of 16) will be created and your most recently equipped items will remain with the new corpse. Be careful about equipping valuable equipment when you already have a corpse out in the field, if you exit a realm game with more than one corpse on the ground, only the corpse having the most valuable equipment (gold equivalent value) will be saved. Also, if you die and you already have 16 corpses, your items will fall to the ground, and anyone can take them. Unequipped items, however, will always remain in your inventory.

When you find your corpse, click on it to take all of its equipped items. Only you (and anyone you permit) can loot your corpse.

After re-equipping your items, you might want to confirm that you are using your weapon of choice, and not your “backup” equipment or some item you accidentally picked up from the area surrounding your corpse.

If you exit a game without retrieving your corpse, one will be placed in town in the next game you create or join.

NOTE: A “Hardcore” character cannot be reincarnated if it dies — you will simply return to Battle.net chat as a ghost. Hardcore characters cannot create or join games once they have died.

Multiple Corpses/Losing Items!
A player may have up to 16 corpses.

Realm Characters: The corpse with the most gold value (in items) will be saved between games. So keep this in mind when putting on equipment to recover your corpse. Your original body with your equipment should save unless you manage to equip yourself with a greater value of equipment, die, then leave the game.

Open Characters: Only your oldest corpse is saved between games. Make sure you go back and recover your original body with your equipment before leaving the game.

Warning on recovering your corpse
If you needed +Strength or +Dexterity items to equip other weapons or pieces of armor, you may have to re-equip these items manually. When you click on your corpse, the game attempts to re-equip your items to where they were before your death, but this depends largely on the order in which your items are picked up. For example, armor that requires more than your base Strength will not be equipped if the game attempts to place it before placing the item that increased your Strength enough to wear the armor. In this case, the armor will return to your inventory; if you do not have enough room, it will remain on the corpse. Check your inventory and make sure that all of your items have been re-equipped correctly. 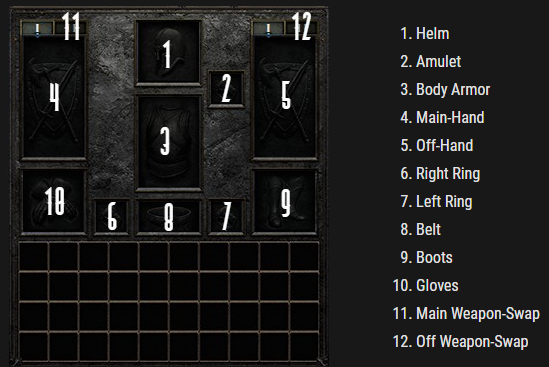 Body Count
Having Difficulty recovering your corpse?
If you can’t find your corpse, or if it’s too dangerous to retrieve it with your current equipment, simply exit and re-enter the game. Your corpse, and all of its items, will appear near your starting point in town. The only drawback is that you will lose any gold your character dropped when he died and you will give up the chance to regain 75% of your lost experience on Nightmare and Hell Difficulty. This is a good option for Nightmare and Hell difficulties, in which death results in lost experience. The corpse will appear at your starting point, typically near the point where Town Portals appear in town: In Lut Gholein, this area is at the bottom right of town. In Kurast, it is next to Meshif. You should be able to find your corpse easily if you explore the town.

Character Saving/Loading and Corpses
Periodically, Battle.net will automatically save every character playing in every Diablo II game. Your character will also be saved when you choose “Save and Exit Game” from the ‘Esc’ menu. If you die and leave a game without retrieving your corpse, it will be placed in town at the beginning of the next game you join or start.

The character save data includes character Attributes, inventory, Skills, Skill hot keys, control configuration, Waypoints activated, the character’s corpse (if one exists), the list of completed Quests, and the contents of the character’s Stash.