Defeat The Reaver in Ramparts Map while affected by

Bear Trap is a Path of Exile: Expedition challenge.

Bonus: Kill boss of magic or higher version of this map. Awakening Bonus: Complete this map with at least tier 14 and Awakening level 2.

The Reaver is a unique Undying who is the boss of the Ramparts Map. He is based off the Sarn Slums boss Perpetus. A decent amount of armour is recommended.

Bear Trap throws a trap that deals physical damage to the enemy that triggered it and applies a debuff that greatly reduces movement speed and causes them to take increased damage from traps and mines. 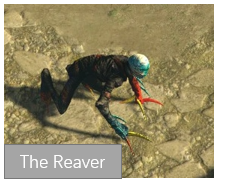