How to get D2R Akara Reset Skill?

Complete Akara’s “Den of Evil” quest at the beginning of Act 1. After you talk to Akara to turn in, a new option shows up on her conversation menu: Reset stat/skill points. Akara’s policy is the classic “everybody gets one.” That said — you only get one per difficulty. Once you use it, it’s gone for good. 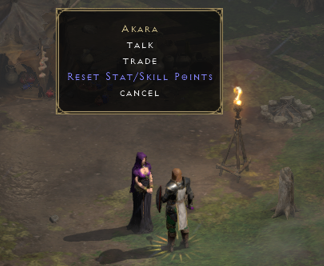 Were you looking for the dungeon, the Den of Evil?

This is the first quest that the player is offered upon starting the Diablo II, and can be activated by talking to Akara in the Rogue Encampment. Akara will tell you of a cave filled with demons that may possibly attack the camp, and requests that you destroy them.

The Den of Evil is located in the Blood Moor, just outside of the Rogue Encampment. The cave is noticeably dark and is home to Fallen, Fallen Shaman, Zombies, and Gargantuan Beasts. A Super Unique Zombie named Corpsefire is also located in the cave, usually at the end opposite of the entrance.

This early in the game when your defenses are still low and life is still also low, it is better to be prepared. Remember to attack Shamans first before attacking their minions – Shamans do not appear outside in the first area, but can resurrect their minions.

Nearing the end of the quest, the quest will update itself with how many monsters are left within the Den.

Once all monsters have been cleared, the Den will be flooded with light, and you will be able to claim your reward from Akara. Along with earning her trust, Akara will grant you one free Skill Point plus one free Character Skill/Stat Reset.