The Forbidden Sanctum is an area found in the Sanctum league. Players must explore a randomized dungeon, collecting Aureus coins and trying to reach the end before their Resolve runs out.

PoE 3.20.1: The Resolve bar now flashes when you heal or damage your Resolve.

Upon entering the Sanctum, you’ll uncover a map that reveals a few of the rooms ahead of you. Sparse details of the room and its rewards are shown, so you must plan carefully as each mistake will dwindle your resolve. 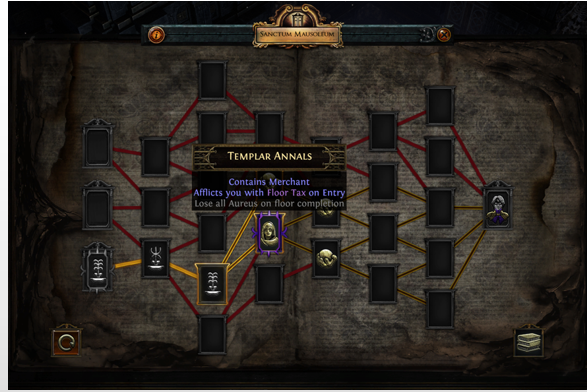 When your resolve runs out, your Sanctum run ends. Each time you enter the Sanctum, you will seek to push yourself farther than before through its four floors.

The Sanctum’s rooms hold many secrets. Some contain ancient fountains you can rest at to restore a portion of your resolve. Others will curse you with an affliction, hindering your progress. These afflictions stack up as you explore deeper and deeper within the Sanctum. 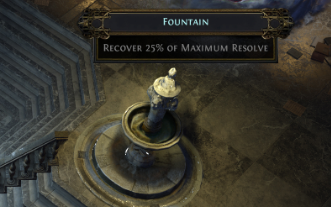 If you run out of resolve before reaching this goal, you lose everything you gambled.

How hard are the Sanctum mechanics for melee builds?

Your resolve is impacted less by attacks that you're close to, so melee characters can have an easier time.

3.20.0b Patch Notes: Gaining increases to your maximum Resolve now heals your Resolve by that same amount.