PoE 3.20: Added a new, optional game mode for Path of Exile: Ruthless. This is an additional character creation flag alongside Hardcore and Solo Self-Found that allows you to opt-in to extreme item scarcity and various other changes. Challenges will not be enabled in Ruthless versions of the Sanctum League.

Ruthless is an optional new game mode which offers a more challenging way to play Path of Exile. Ruthless players can expect extreme item scarcity, limited crafting and many other changes such as support gems being drop-only. Ruthless is a mode about friction, tension and anticipation. It's much more difficult, but overcoming that difficulty feels highly rewarding. In a world where your items are far below par, every item drop has the potential to be the breakthrough one you need. 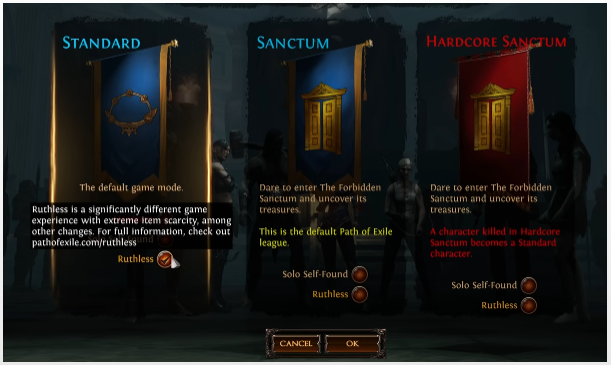 You can access Ruthless during character creation by selecting it as an additional flag alongside Solo Self-Found and Hardcore.

Ruthless (previously codenamed "Hard Mode") is an additional character creation flag alongside Hardcore and Solo Self-Found that allows you to opt-in to extreme item scarcity and various other changes.

The core Ruthless experience is that you don't have strong enough items to handle the content. Every item that drops has the potential to be an upgrade to your current gear.

GGG expects to publicly release Ruthless alongside the 3.20 expansion in December. The first league with Ruthless active will still be deemed a bit of a Beta Test, and hence GGG will not be afraid of making mid-league adjustments to Ruthless, which is something GGG tries to avoid doing in the regular game. Challenges will not be enabled in Ruthless in 3.20.

Ruthless is a mode where you aren't expected to get to maps. Even if you do get to maps, you're probably not going to reach red maps. If you somehow get there, how will you sustain them with such little access to currency? Will anyone manage to kill pinnacle bosses? Will anyone even see an Uber pinnacle boss?

In Ruthless, most of your items come from killing monsters. It's hard to find magic, rare and unique items, and it's even harder to craft them. Crafting is a powerful luxury that you'll have to use sparingly for the right items.

Gems cannot be purchased from vendors.

The Fixture of Fate and Death and Rebirth quests each award you a token that can be traded to Siosa for any Skill Gem of level 31 or lower.

Support Gems can only be found as random drops. You cannot obtain them deterministically. Ruthless is a league of item scarcity. When items are scarce, they are exciting to find, exciting to look for and exciting to trade. GGG is defining Support Gems as items. This means some builds are harder to assemble, and careful planning is needed by SSF Ruthless players.

Gems gain far less experience than they do in regular Path of Exile. It's a lot harder to level your skills up, which is another axis of reduced character power in Ruthless. A melee character's damage comes from their weapon. Spellcasters get a lot of their damage from their gems as they level up. This change helps reduce the power gap between these two playstyles that is otherwise exacerbated by item scarcity in Ruthless. It also means that when you're farming an area for item drops, you can grind for gem experience at the same time.

Almost all movement skills are not available in Ruthless. In this mode, movement skills trivialise game systems that matter a lot more, such as terrain layout, monster body blocking, and actual level traversal.

Ruthless is challenging and punitive. It contains a number of changes that make Path of Exile harder and allow skilled players to differentiate themselves from everyone else.

Why won't challenges be enabled in Ruthless?

Do Ruthless characters migrate to permanent parent leagues at the end of a challenge league?

Some gameplay situations become very difficult without the ability to use movement skills, such as Grasping Vines. Is this something that is being taken into consideration or is this part of the challenge?

It's something we'll take in consideration. The way we're looking at it is if a mechanic is impossible without being able to teleport away, it should be changed for both Ruthless and the core game.

Have items that grant movement skills been removed as well?

Items that grant movement skills are currently still obtainable, but the skills they grant will have longer cooldowns. We'll be keeping an eye on this in the lead up to the 3.20 expansion and may modify them if needed.

Are you able to join a party with other players in Ruthless?

Why will challenges not be available in Ruthless during the 3.20 expansion?

Challenges will be disabled for 3.20 because some may not be completable in Ruthless (for example, some content might be disabled while we continue to work on it, but ideally we will have everything in that we intend to be part of Ruthless). We'll try to sort out some solution for challenges in Ruthless from 3.21 onwards.

Is Ruthless taking the place of the 3.20 expansion?

No. Ruthless is additional content coming out alongside the 3.20 expansion.

Is there a default item filter for Ruthless?

No. Due to the scarcity of item drops in Ruthless, a default item filter is unlikely to be necessary.

Is Ruthless being used to test balance changes that are intended for the main game?

No. Balance changes made to Ruthless have no bearing on the main game. If we feel a change is good for the main game, we'll just make it there as well.

Will we be able to make Ruthless private leagues?

We currently plan to have the option to make Ruthless private leagues for the 3.20 expansion.

Will all past league content be available in Ruthless?

The intention is that all past leagues will be available, but some appear in different forms. Content from past leagues is encountered less often than in regular Path of Exile.

Is Ruthless available on consoles?

Will Ruthless have its own achievements?

We don't currently have any new achievements planned specifically for Ruthless.