Path of Exile: Lake of Kalandra introduced Atlas Memories as a new core game mechanic. In maps, you’ll very rarely find a Memory item, which represents a set of memories that an NPC has about their past. Each successive map in the sequence gets more difficult and rewarding as the memories intensify.

Right-click on this, then left click on a completed Map on your Atlas to apply this Memory.

In every expansion leading up to Path of Exile 2’s release, we’ll be improving Path of Exile’s end game with new content to explore and new ways to customize your end game experience. In the Lake of Kalandra expansion, we’re introducing Atlas memories. They aren’t a league feature, they’re part of the core game, affecting Standard and persisting once the Kalandra League has ended.

In maps, you’ll very rarely find a memory item which represents a set of memories that an NPC has about their past. Something special happened to them while exploring maps, and you’re able to experience those events for yourself.

Let’s have a look at a couple of examples. In this Atlas memory, Kirac tells you about the time that he stumbled across a staging ground for a Harbinger invasion of Wraeclast. Each successive map you play in the sequence has more and more Harbinger portals and invaders that you must deal with.

This is a memory of Niko’s, where he entered a sequence of maps that were entirely consumed by permanent breaches like a Breachlord’s domain. He survived to talk about it, but will you?

Right click a memory and apply it to a completed map on your atlas. It’ll mark out a series of adjacent maps that the Atlas memory will span.

When you next talk to the relevant NPC in your hideout, they’ll tell you about their recollections and will allow you to start exploring the memory. 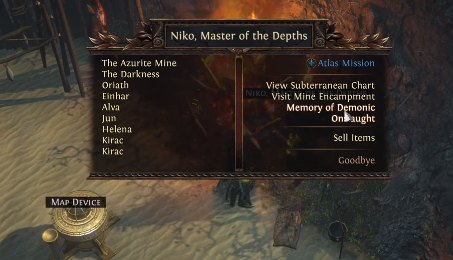 Each map in the sequence is provided for free by the NPC and you’ll be able to roll it like usual before running it. Because these maps are memories of the NPC, they’re not affected by your atlas tree. However, the content is generally as difficult and rewarding as a fully specialized Atlas tree would cause it to be.

Each successive map in the sequence gets harder and more rewarding as the memories intensify. While memories are tradeable, they’re also very rare and valuable, so you’ll probably want to complete them yourself if you can.

For players who love lore, Atlas memories help expand on the backstory of key NPCs. For players wanting to try out different league mechanics at quite high levels of juice that they haven’t specialized their atlas for, memories let them do this without a bunch of respeccing. And for everyone else, Atlas memories are a great way to earn some valuable items. If you’re strong enough to complete them.