Ambush is a new Blink skill in Expedition league which teleports you to an enemy, blinds them and exerts your next one-handed melee attack.

Ambush is a normal skill and not the main damage skill. There is only 0.1% of Path of Exile players use this skill gem. In fact, for travel skills, Flame Dash is the best choice.

For support gems, Second Wind Support is one of the best choice.

Although this skill is inspired by the Shadow's Assassin ascendancy class, most players use this skill is the Raider class(64%). The other popularity is Ascendant(14%), Juggernaut(7%), Pathfinder(7%), and Assassin(7%).

For Raider class, Spectral Helix is one of the best main skills. Recommend using weapon: Claw/ Shield. These passives are also recommended: Acrobatics, Phase Acrobatics, Quartz Infusion, Avatar of the Veil, Wind Dancer, Rapid Assault, and Avatar of the Chase.

Ambush is now offered to the Shadow for completing Breaking the Seal, and can be purchased from Petarus and Vanja by the Duelist, Ranger, and Scion.

Ambush Skill. It teleports you up to an enemy, blinds them and exerts your next one-handed melee attack. This exerted attack has a high critical strike chance and multiplier. In addition to this helping your assassinations, you can also use

Ambush to quickly re-engage targets after dashing away. 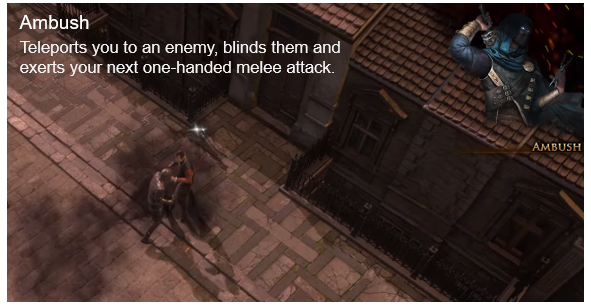 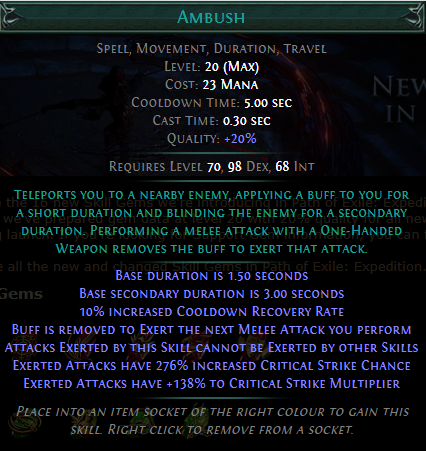