The top five players of each of the ascendancy classes by depth will receive a Demigod's Authority (Unique Golden Blade). Changing your Ascendancy Class will be disabled for the duration of the event. 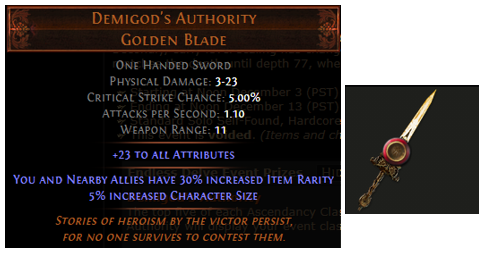 Players who reach level 50 will receive a Twilight Mystery Box. This prize is available only once per account for this type of event. Levelling multiple characters will not grant multiple mystery boxes. 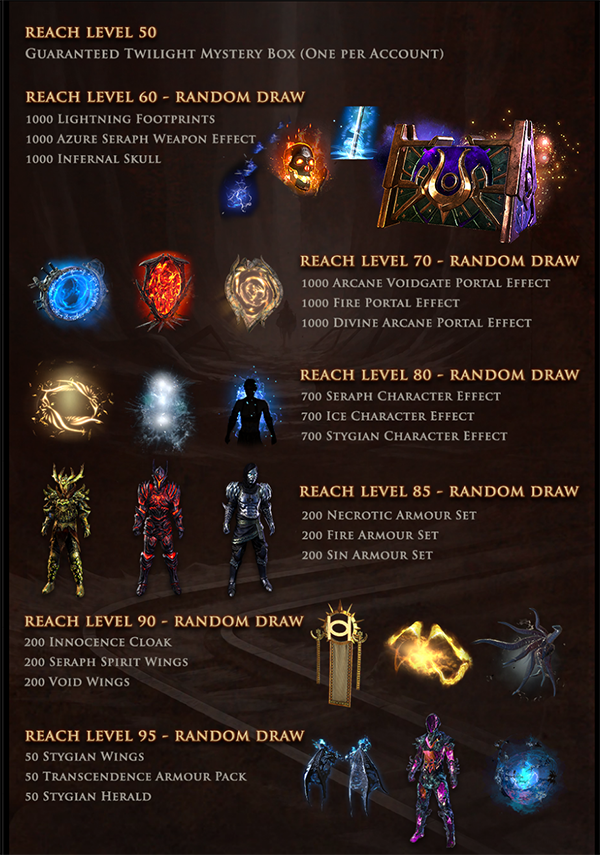 The microtransaction prizes are not awarded automatically based on meeting the level requirements. Prizes will be awarded at the end of the event. Leveling multiple characters in the same event will increase your chances of winning one of the randomly-drawn prizes.

At various level thresholds, you’ll have access to the passive points you’d normally gain from quests and incur Kitava’s resistance penalties. You’ll also be able to ascend your character by using the Altar of Ascendancy from within the mine encampment. Lilly Roth will be available alongside Niko to provide access to skill gems.

You can see the Endless Delve Countdown Timer from the following Path of Exile links.

In this event, you'll play exclusively in the Azurite Mine. Sulphite is not required for progress, and you begin with some starter gear. At various level thresholds, you'll have access to the passive points you'd normally gain from quests and incur Kitava's resistance penalties. You'll also be able to ascend your character by using the Altar of Ascendancy from within the mine encampment. Lilly Roth will be available alongside Niko to provide access to skill gems. Your Delve progression is per character. This race type is voided.

At the character selection screen, there’s a panel below your characters which will list the events available. You can register the event by clicking ‘join’. This option becomes available 30 minutes before the event is set to begin. Your character won’t be able to move until the event starts. 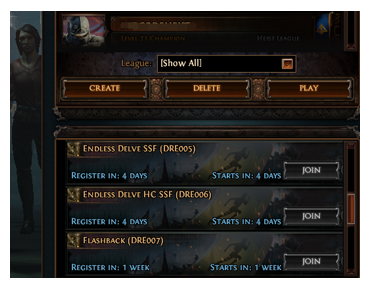 Ascendancies: levels 33, 55, 68, 75. Note that the Altar of Ascendancy is available in the Mine Encampment. Changing your Ascendancy Class has been disabled for the event.

Path of Exile enables 11 starter items that will be available to new characters in the Endless Delve event. Characters will be given an appropriate selection of these items suited to their class, but you can share the items between characters via your stash. Veteran Path of Exile players may recognise these items from past Descent races. They always come with three linked, white sockets. Check them out below!

A delve is the exploration of the infinite Azurite Mine dungeon. The character guides a Crawler(mine cart) powered by Voltaxic Sulphite through the mines to a checkpoint.

How does depth scaling work compared to normal Delving?

The levels of monsters at lower depths have been decreased to make Delving from level 1 possible. Monster level is simply equal to depth up to depth 74, where it syncs back up with normal Delve scaling. Level, biome mod and damage/life scaling with depth are the same as normal Delve from depth 74 onwards. Other depth-scaling mechanics like darkness resistance, light radius, Azurite, and rewards will be the same as normal Delving at any depth.

Will the on-death experience penalty be present? If so, when?

Is the Delve progression per character or per account?

Can you choose your bandit reward?

The free skill points you’re granted for levelling up include 2 points to match killing all the bandits. You’re unable to help a bandit, or change the skill points to another reward via the vendor recipe.

Why is Endless Delve Solo Self-Found?

To party with other players, you would need access to towns or your Hideout which are not available due to the nature of the event.

Can I play my existing character?

No, you’ll need to make new characters in each event.

Can I make Private League versions of these events?

Can I change my Ascendancy Class during the event?

No. This is to prevent people changing classes at the last minute as a cheap way to get a Demigod’s Authority.

Why is Delve Solo Self-Found?

To party with other players, you would need access to towns or your Hideout which are not available due to the nature of the event.

If I delete my character, will I still get a prize?

No. Please do not delete your characters until after the prizes have been awarded.

Will I still be eligible for prizes if my character dies?

If I level multiple characters will I have a greater chance of winning a prize?

Yes. Every character you level will be independently included in the pool for the prize draw at the end of the event. This excludes mystery boxes, where you will only be able to receive one per account per event.

Can I win more than one microtransaction prize?

Yes, it’s possible to win multiple prizes. This excludes the mystery box which is awarded once per account per event. If you reach level 50 in all three events, then you will receive three mystery boxes. These can be found in your microtransaction stash once awarded.

When will I receive a prize?

The Twilight Mystery Box will be awarded automatically when you reach level 50 during an event. The other microtransactions and Demigod’s Authorities will be awarded at the end of the event. You’ll receive a private message on the website to notify you when this has happened. Note that outside of the Mystery Boxes and Demigod’s Authorities, prizes are drawn randomly and are not necessarily guaranteed. We’ll post on our Twitter to confirm when the final prizes have gone out.

Is the prize pool shared between all platforms?

Each platform (PC, PS4 and Xbox One) has its own Demigod’s Auhority prize pool. However, the microtransaction prize pool is shared across all platforms.

Will I have access to my crafting bench in Endless Delve?