Rage Vortex consumes your Rage to unleash a whirling vortex that rapidly hits enemies within its range.

There are about 0.5% of Path of Exile players use this gem as the main damage skill. Among those players, 99% of players are Berserker.

For the best use of this skill, these skills are also recommended: Intimidating Cry, Berserk, Enduring Cry, Leap Slam, Dread Banner, Blood and Sand, Ancestral Warchief, Herald of Purity, Pride.

For weapons, you can choose Axe / Shield, Sword / Shield, or Two Handed Axe. Personally, I prefer to choose Axe or Sword + Shield.

For attributes and defensive, the following is a Level 95 Berserker character example:

We are always hesitant to change audio which has been in the game for a long time as there is a fine line between something nostalgic, and something that just hasn't aged very well. Sweep fell into the latter category so it made sense to update this while working on Rage Vortex, as it uses the base sweep animations. For the new sweep audio, I mostly wanted something that was heavy but allowed space for other skill audio to come through, so each ability still keeps its own identity. The first layer was simply the original sweep audio, as building on top of that would work in this case. Most of the additional pieces are what you would expect, with distorted metal scrapes and whooshes. A couple of stand out layers used would be the sound of a snake hiss and strike (which sounds like a whip), a torch whoosh and the sound of an industrial refrigerator. Altogether making a tight, but meaty weapon swing.

For any skill I work on, if possible I try to start with the core sound which in this case was a metal container being slammed shut. Passing that through a chain of light distortion with high feedback, into an exponential distortion with moderate feedback, it turns the impact into a tonal whoosh with a doppler-esque quality. I then added a couple of fresh whoosh layers, some metal scrapes for the high end and a small amount of reverb, bringing it all together as a rather pleasant dirty mess.

The thrown portion of skill consists of a loop of a stone grinder pitched an octave down, some geyser eruptions and ambience from a heavily distorted industrial cacao grinder. All sent through some pitched delays and a light tremolator to help convey a spinning motion.

Rage Vortex is now offered to the Marauder for completing Sever the Right Hand, and can be purchased from Clarissa by the Templar, Duelist and Scion.

Rage Vortex provides a new way to consume your rage: unleashing a whirling vortex that rapidly hits enemies within its range. It gains damage and area of effect based on how much Rage was sacrificed. The

Vortex slows down when enemies survive being hit by it, causing it to deal intense damage to tough targets.

While you can only have one

Rage Vortex active at a time, characters such as Berserkers who are able to generate a lot of Rage quickly will find it a great way to augment their damage output. 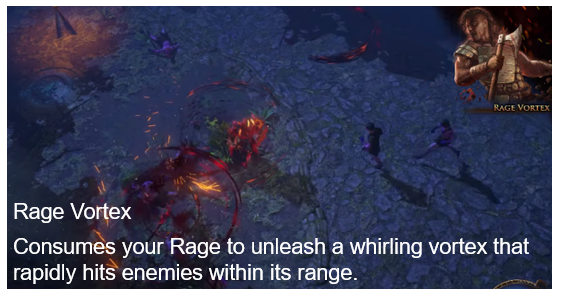 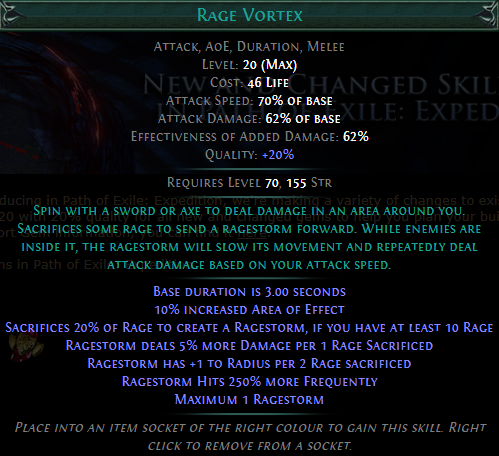