In case you missed the first announcements, MyTEAM: Draft is a new multiplayer mode where you pick a full lineup of Player Cards which will include the latest cards in MyTEAM. When starting a new Draft you will be presented with seven packs to choose your 13 players and coach. You will pick up two players from each of the position packs, but where the Draft will shine is with that first pack on the left. That is the Featured Pack.

What is the Featured Pack? This is where the latest releases in MyTEAM will show up for you to draft and compete with. Unlike the other packs, this Featured Pack will only contain three cards which are added to your drafted lineup. You can likely count on these players being the best players in your lineup to lead your drafted team to victory! Look for the Featured Pack to be updated with the latest player cards released in MyTEAM each Friday. The positional packs will also be updated as well, but don’t count on the previous Featured Pack players showing up in there immediately after cycling through.

But what are you competing for in MyTEAM: Draft? Every Draft will net you a guaranteed League Pack and at least a single pick on a Draft-exclusive Ascension; full of prizes to add to your permanent collection! For every win you get in your drafted lineup’s limited run, you will earn additional Ascension picks. With the high-stakes of a Draft run, you can expect some great rewards in this Ascension, including an exclusive Grand Prize Player each Season. And for Season 1: Call to Ball, that player is Pink Diamond Glenn Robinson, a wing that ANY MyTEAM player will want to dominate with to start the year. Once you complete a run by either achieving ten wins or taking three losses, you will use all of your earned Ascension picks and then be able to Draft a brand-new lineup. 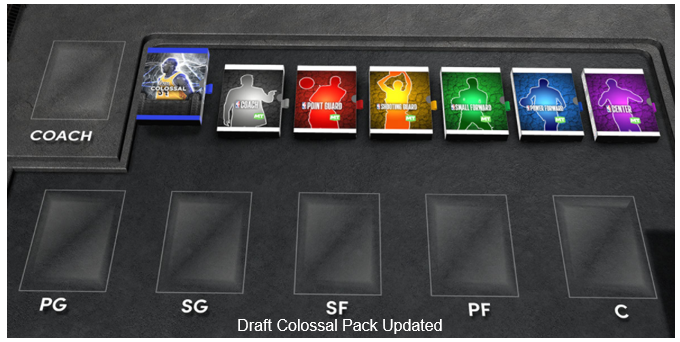