Forbidden Rite fires a barrage of exploding chaos projectiles at nearby enemies while also inflicting damage on you.

Forbidden Rite has a high popularity. There is about 7.6% of Path of Exile players use this gem as the main damage skill. Among those players, 97% players are Hierophant.

For attributes and defensive, the following is a Level 100 Hierophant character example:

Forbidden Rite can be purchased from Yeena by the Witch, Shadow, and Scion after completing Intruders in Black.

Forbidden Rite is a powerful new spell that fires an exploding chaos projectile at a targeted area. It also targets a selection of enemies in an area around the player’s location and fires projectiles at them too. But be careful,

Forbidden Rite also inflicts damage on you when cast. If you can find a clever way to mitigate this harmful downside, you’ll have devastating and widespread damage at your fingertips. 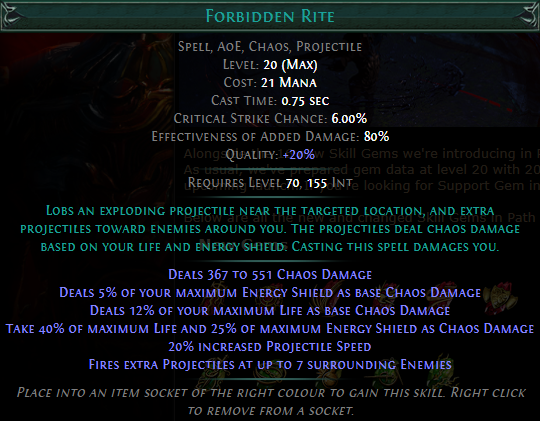