Summon Reaper is a new minion that feeds off your other minions (literally). It inflicts bleed on enemies and can be commanded to attack specific locations.

There is about 0.2% of Path of Exile players use this gem as the main damage skill. This skill gem is inspired by the Witch's Necromancer ascendancy class. In fact, among those players, 90% of the character is Necromancer class.

For weapons, you can choose Wand / Shield. Another choice is a two-handed Staff.

For attributes and defensive, the following is a level 93 Necromancer character example:

It's interesting to juxtapose my thought process behind the sound design of Summon Reaper and Eye of Winter. I had to focus more on its gorey dual scythe skills rather than what it should sound like as just a regular minion. We wanted to give players a strong sense of satisfaction when directing the reaper towards attacking an area you select. I used layers of frequency filtered metallic swings for when it hits monsters in the targeted area. Then I blended the reverb tail of that dual swing with another reverb tail from a combination of distorted roaring sounds. The latter acted as a unique tonal layer for the reaper’s scythe. I also have numerous variations, with different lengths and layers of splattering blood sounds, to make its blood thirsty aesthetic.

Summon Reaper is now offered to the Witch for completing Sever the Right Hand, and can be purchased from Clarissa by the Templar and Scion.

Summon Reaper creates a single powerful minion that uses fast melee physical attacks which cause bleeding. While the Reaper is active, you can use the skill again to direct the Reaper to a specific location, dealing a powerful attack along its path.

The Reaper wants to be your only minion. It reduces the life and damage of your other minions, and will consume them to heal itself and gain damage and speed buffs.

When designing this new skill for the Necromancer, we wanted to explore the idea of having a single ultimate minion. While there were ways to somewhat achieve this before, the Reaper is quite different in its abilities and interactions with other minions. It also feels much more active and directly under your command.

One quick note though… the Reaper will absolutely eat your Animated Guardian if you’re not careful.

How often it consumes minions and what the gem means when it says that the reaper "empowers" itself upon consuming your minions.

The Consume skill kills one of your minions and applies a buff to the Reaper for a base duration of 6 seconds. The buff grants 40% increased damage, 20% increased attack speed, 20% increased movement speed and 10% increased character size. It also recovers 50% of the Reaper's life.

The Reaper has muliple instances of the skill which its AI uses in different circumstances: 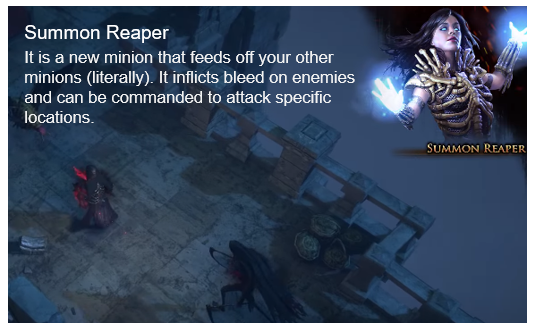 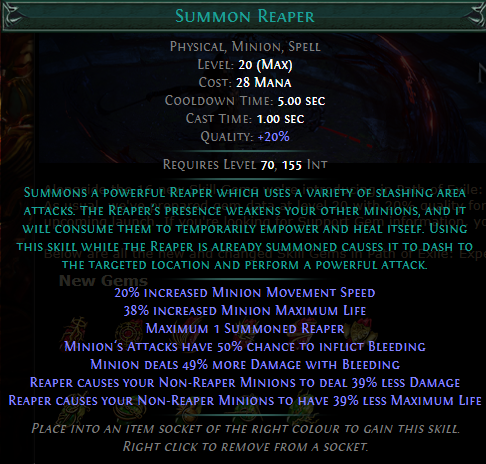