In-game description: Zero is already contemplating your next move.

We started the broadcast by announcing the Patch 6.3 title. Patch 6.3 is scheduled for early January 2023, as it’d be difficult for us to conduct maintenance during the holidays in the case of an emergency. 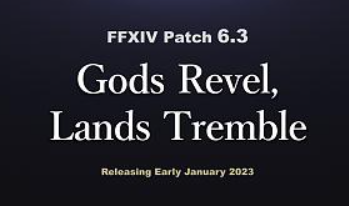 After 6.2 Buried Memory, FFXIV’s 6.3 update will be called ‘Gods Revels, Lands Tremble’ and will continue the story from 6.2 and bring with it a whole host of new activities for players to get involved in including job balance changes, additions to the housing system, new quests, and more.

Additionally updates scheduled for Patch 6.35 were also revealed during the Producer Live broadcast, including additions to Island Sanctuary, a new series of daily tribal quests, and the next stage in the fan favorite Hildibrand story saga. Here’s a full breakdown of what was revealed.

Does FFXIV update 6.3 have a release date?

There’s no concrete release date for update 6.3 as of yet, but the major patch is set to launch in early January 2023.

Therefore, expect it to drop sometime soon after the holiday season ends.

FFXIV producer and director Naoki Yoshida outlined a variety of additions and changes that will arrive with update 6.3, including:

Yoshi-P also confirmed the addition of new housing wards to existing districts, giving more players the chance to purchase a home for themselves or their Free Company.

Yoshi-P also discussed Patch 6.35 and what this update would include:

We imagine we’ll learn much more about Gods Revels, Lands Tremble in the near future, and as the story being told in Buried Memory draws to a close.