Dance of Destruction - Path of Exile

Dance of Destruction is a new Atlas Keystone Passive Skill.

Flavour Text: Atlassian aberrations engage in a deadly dance. Will you be joining them in the fray? 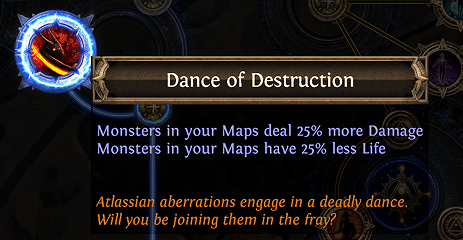 The Wellspring of Creation and Dance of Destruction

The Wellspring of Creation and Dance of Destruction Keystones change the ratios of monster life and damage in maps on the Atlas so that they are more dangerous and less tanky, or vice versa.

These two keystones are designed to be remedial, allowing players with an abundance of offence or defence to normalise themselves so that they can handle the content better. If you find yourself in a situation where you are waiting for a weapon upgrade or can’t fix your resistances, then you could allocate one of these keystones to temporarily make things easier, before unallocating it later when your build is complete.

Q: In the livestream, we were asked whether the map monster life modifiers from the Wellspring of Creation and Dance of Destruction Atlas Keystone passives would affect the damage dealt by skills like Detonate Dead.

After some discussion, we feel that:
a) It probably shouldn't, because the design intent of the keystones is not to disproportionately affect certain skills that scale damage off monster life.
b) Some other sources of additional monster life, such as Delve Depth, already act in a similar way.
c) This is actually in line with the "no nerfs, no buffs" philosophy of 3.18

So Detonate Dead builds (and other ones using skills like this) will still be as strong as they were in 3.17, but not any stronger due to this keystone.