PoE 3.20: Doomsday keystone has been reworked into a support gem in The Forbidden Sanctum expansion.

Cursed Ground Support is now able to be purchased from Clarissa by the Witch, Shadow, and Scion upon completing A Fixture of Fate. 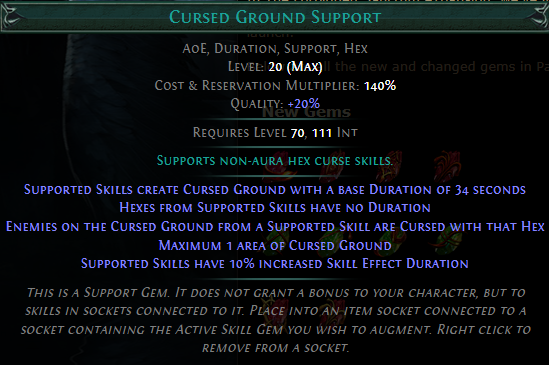 Doomsday is a keystone passive skill that modifies Hex spells. When casting the Hex spell, instead of applying the curse which gains Doom over time, the spell creates a Hexed Area for 1 second. Enemies in the Hexed Area receive the curse, and after 1 second, the Hexed Area expires and applies the maximum amount of Doom to enemies standing in it.

Hexes are spells which apply the curse in an area of effect.

Hexes have reduced effectiveness against bosses and certain unique enemies. Act and map bosses, Conquerors of the Atlas , Incursion architects, Immortal Syndicate members, Breachlords have 33% less Hex Curse Effect. Sirus, the Shaper, the Elder, Shaper and Elder Guardians, The Black Star, The Searing Exarch, The Infinite Hunger, The Eater of Worlds, and The Maven have 66% less Hex Curse Effect.

Hexes that are re-applied will replace the older Hex and reset Doom, but will not cause Doom Blast to trigger.