How to use Atziri’s Promise?

Right click to drink. Can only hold charges while in belt. Refills as you kill monsters.

Glassblower’s Bauble can improve the quality of a

Dying Sun to 20%. Glassblower’s Baubles are used to increase the quality of a flask. Quality on recovery flasks increases the amount of life and/or mana recovered by that percentage. Utility flasks gain increased duration instead. Note that quality on flasks stacks multiplicatively with other modifiers to flasks (for example, the increased flask duration nodes from the passive tree or belts). Furthermore, things with increased flask effect will not only improve the implicit mod of a flask, but any of the mods that the flask has rolled (always rounded down).
20% Quality: Lasts 4.20 Seconds. Consumes 30 of 60 Charges on use. Currently has 60 Charges. 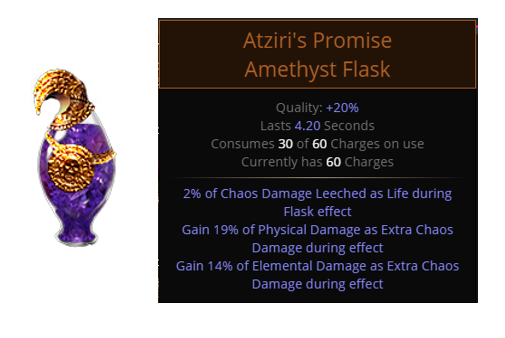 Atziri’s Promise Amethyst Flask is an

Orb of Alchemy. For Hardcore, it is worth to 2

How to get a Atziri’s Promise?

Avatar of Fire is a keystone passive skill that converts 50% of physical damage, lightning damage and cold damage to fire damage. However, the character cannot deal damage with any damage types except fire.

Blood Rage physical damage buff is not negated by Deal no Non-Fire Damage and is not converted to fire.

Brutality Support is a support gem that grants more physical damage while losing the ability to deal elemental and chaos damage. 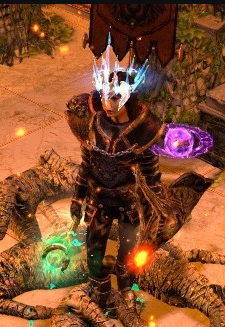