Spectral Helix is now offered to the Scion for completing The Siren’s Cadence, and can be purchased from Nessa by the Marauder, Templar, Duelist, Ranger, and Shadow.

Spectral Helix throws a spectral copy of your melee weapon which spirals outward from you, dealing damage to any enemies it passes through.

The design of this skill achieves what we had always wanted

Vaal Spectral Throw to be. We thought it was a really fun idea for a skill but because of the limitations caused by the soul-gathering requirements of Vaal Skills, it wasn’t possible to use Vaal Spectral Throw as a primary skill.

Now that Spectral Helix can live up to this purpose, we’ve reworked Vaal Spectral Throw, which we’ll reveal closer to release.

One of the other issues that Vaal Spectral Throw had was that it didn’t work very well in indoors areas. However, Spectral Helix improves upon this as the projectiles that spiral outwards can also bounce off of walls and proceed to hit enemies, rather than simply disappearing upon collision. 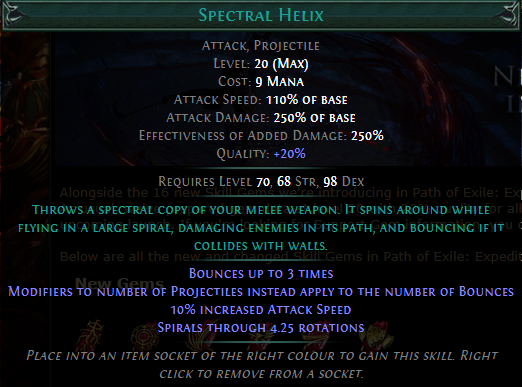