The Lifetap Support Gem causes supported skills to cost life instead of mana. Once you’ve consumed a certain amount of life to use a skill,
you gain Lifetap, which increases your damage for a few seconds.

Lifetap Support is now offered to the Marauder, Templar, Duelist and Scion for completing The Caged Brute, and can be purchased from Nessa.

Hiltless is a unique Reaver Sword. It grants Socketed Gems are Supported by Level 1 Lifetap. 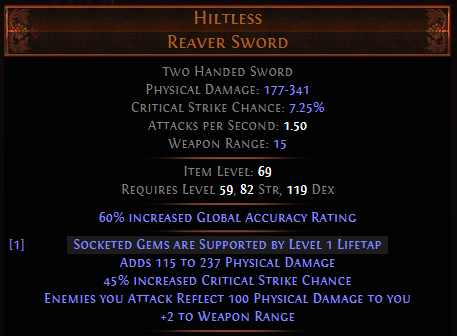 Blood Magic Support gem has been split into

Lifetap Support gems, as the lack of a damage multiplier made it a poor choice for primary skills. Now each of these new supports is balanced for the appropriate use case.