The 2018 Saleen S1 is available after completing 50% of the Spring seasonal playlist.

Until the year 2000, Saleen made its name upgrading Mustangs into dominant track cars. But at the start of the 21st century, it was time to release something uniquely all their own, and that was the S7: a 7L supercar that looked more like an F1 prototype, and sold for a cool $388,500. It led directly to the creation of the 2004 Ford GT, and established Saleen outside of their Mustang roots. 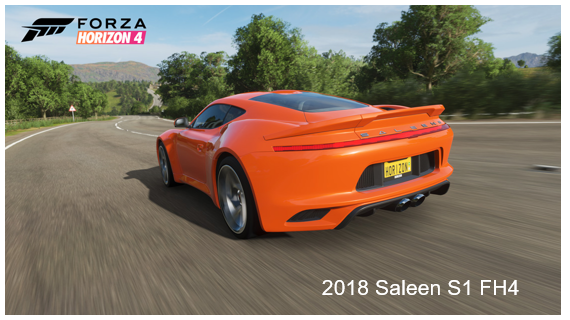 Saleen continued to provide assembly services to other manufacturers until 2018, when they finally followed up the S7 with the slightly more moderate ($100,000) S1, a mid-engine supercar featuring a 2.3L four-cylinder turbocharged engine. The S1’s inner workings are all Saleen, while the outward stylings are influenced by the defunct Artega GT. After the makers of the Artega went bankrupt, the GT design was purchased by a Chinese manufacturer called JSAT, which asked Saleen to assist in modernizing the design. That modernization would ultimately prove fruitless, but it would give rise to the S1.