The 1973 Mazda RX-3 is available after completing 50% of the Summer seasonal playlist.

If the Cosmo was built as an expensive, commercially nonviable halo car so that its technology would influence future Mazda offerings, the RX-3 would be one of the first beneficiaries. Sensible and affordable, the RX-3 gave Mazda their first chance to build their identity and brand, both as a manufacturer and a presence in the racing world, around the Wankel rotary engine. 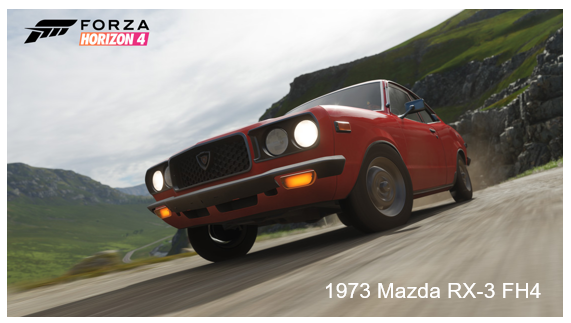 The car was called the Grand Familia when it came with a piston engine, while “RX-3” was reserved for the rotary version, and in its home turf of Japan it was known as the Savanna. Just as with the Cosmo, Mazda put the RX-3 up for competition to prove its legitimacy, driven by the same person who had taken them to the fourth at the 84 Hours at the Nürburgring. They took the car to the 1972 Fuji Masters, and upset the favored Nissan with a win (and three more in ’72, ’73 and ’75), followed by a victory in its class at Bathurst.

The RX-3 benefitted greatly from the rotary engine because of its size. Originally designed to house a piston engine whose weight and power were intended for an ordinary passenger car, when the RX-3 was equipped with the much smaller rotary, it became dangerous on the track. A stock RX-3 topped out over 100 horsepower on only a one-liter engine—comparable to engines four times its size. The RX-3 became so popular for motorsport drivers that finding a stock version of this car now is nearly impossible, all of them having undergone some kind of upgrade or transformation.