The release date of PoE 3.21 is about April 7, 2023. GGG is currently planning to launch the Path of Exile 3.21 expansion in early April. You may note that this means that The Forbidden Sanctum challenge league will be longer than normal. GGG is currently tinkering with a few ideas for some fun low-key things GGG can do in the final month before the 3.21 launches and will let you know how those ideas shake out in the coming weeks.

GGG has chosen this date so that GGG can make sure 3.21 gets all the development time it needs and that the release schedule for the year fits nicely alongside ExileCon and the release dates of other games.

Additionally, GGG is really happy with how well-received The Forbidden Sanctum expansion was and is hoping to keep the positivity rolling through 2023 with the upcoming releases. Having more development time really helps with that.

GGG announced last year that ExileCon will take place on July 29th-30th in Auckland, New Zealand. This convention will showcase everything you need to know about Path of Exile 2, Path of Exile Mobile and the Path of Exile 3.22 expansion. Many of you have purchased your convention tickets and will be about to make your travel plans.

The release date of PoE 3.22 is about August 11, 2023. If you're coming to ExileCon and wanting to do some travel within New Zealand around that time, GGG is generally recommending that people travel before the convention rather than afterwards. The reason for this is that GGG is currently planning to reveal PoE 3.22 expansion at ExileCon and its launch will take place soon after, likely around two weeks afterwards(July 29 + 2 weeks).

You'll be wanting to play 3.22, so it's best to leave New Zealand a few days after ExileCon. Then you'll have enough time to make it back home and take care of your responsibilities before going full goblin-mode at launch.

Community streamer Zizaran is back with another 10-day Class Gauntlet Event which starts on February 10th PST. Racers will level characters and kill challenging bosses to earn points and compete to find out how each of the classes fare against some of Path of Exile's most difficult encounters. The event will take place in a Hardcore Solo Self-Found Sanctum Event League provided by us with a range of dynamic damage and life mods! The prize pool is funded by the community and Zizaran's event partners. Find out more information in this news post.

This patch includes a number of bug fixes, offline party support and another batch of Voidborn reliquary submissions.

Improvements and other changes
Ruthless-specific changes

This patch introduces new Sanctum content, improvements to the current Kirac's Vault Pass and adds support for the 2023 Core Supporter Packs as detailed in our news post last week. It also contains a variety of improvements and bug fixes to both Sanctum and non-Sanctum content, and some buffs to the modifiers applied to Blighted Maps through anointing them with Oils.

In this league, you'll discover The Forbidden Sanctum, an ancient Templar enclave hidden beneath the Fellshrine Ruins. Abandoned for a long time, it is now controlled by a malevolent entity. You must explore it, uncover its secrets, and deal with the evil that lurks within. 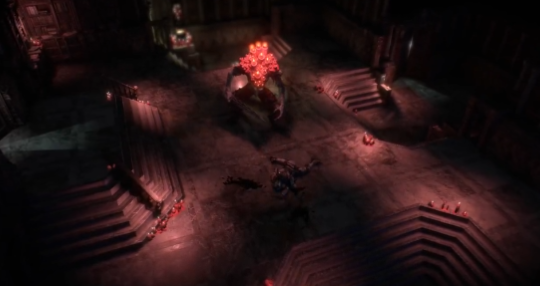 There is no boss kill event for this league.

Added a vendor recipe that can be used to upgrade Scarabs between tiers using the usual 3:1 ratio (up to Gilded Scarabs).

Inside the Sanctum, you'll uncover a map that reveals a few of the rooms ahead of you. Sparse details of the room and its rewards are shown, so you must plan carefully as each mistake will dwindle your resolve. When your resolve runs out, your Sanctum run ends. 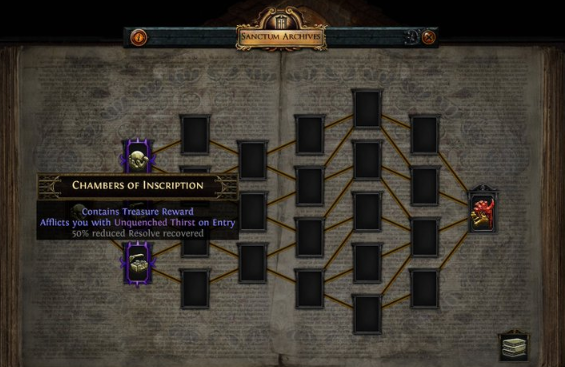 The Sanctum's rooms hold many secrets. Some contain ancient fountains you can rest at to restore a portion of your resolve. Others will curse you with an affliction, hindering your progress. These afflictions stack up as you explore deeper and deeper within the Sanctum.

We didn't announce this in the livestream, but we can confirm that you will be able to save up consecutive Sanctum rooms (up to a limit of eight total - one entire floor), to play later.

You can also receive boons, blessings that help you overcome the Sanctum's dangers. Each time you enter the Sanctum, you will encounter a unique layout that you must assess and adapt to as you explore. 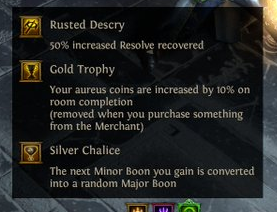 In the Sanctum, you will find gold coins, Aureus, inside chests and from monsters. These coins cannot leave the Sanctum with you but can be traded with a merchant you may occasionally meet. Spend wisely as your Aureus may be used to purchase a crucial boon when the time is right.

The sinister powers at play may present you an Accursed Pact. These pacts offer a powerful benefit with a dangerous cost. You will be tempted but must choose with care. Your decision could signal the end of your time in the Sanctum or be the turning point in your success. 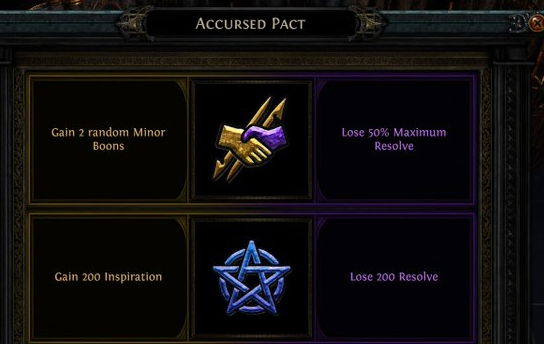 The Forbidden Sanctum is home random miniboss encounters, bosses at the end of each floor and an ultimate showdown against the entity that controls the Sanctum. These fights yield valuable rewards including Relics, piles of Aureus coins, masses of experience, and more. 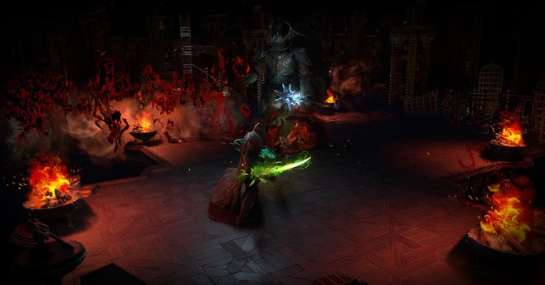 We've improved the Atlas Passive Tree so that players don't need to respec between mapping and boss-killing and can invest even further into content that they enjoy. We've also added a new currency item called the Fracturing Orb which drops from Harbingers.

Fracturing Orb can be used to fracture a random modifier on a rare item with at least 4 modifiers, locking it in place. This can’t be used on Influenced, Synthesised or Fractured items.

We've also rebalanced Eldritch Altars and have made Maven-witnessed map bosses a source of Awakened Gems. 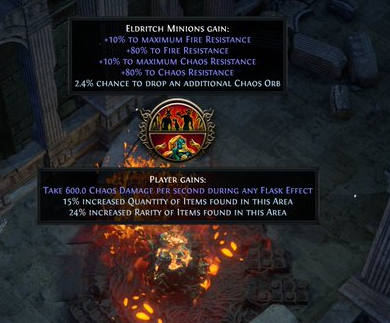 There are over 15 new unique items to be found from within the Forbidden Sanctum and throughout Wraeclast and the Atlas.

We've also massively increased the power and rarity of ten existing endgame unique weapons to bring them in line with some of Path of Exile's most iconic unique items.

This expansion includes a number of changes to Path of Exile's mechanics. We have improved Jewels as a source of ailment mitigation and have replaced most existing unique Jewels with some powerful new ones.

We've also rebalanced Hexes to make them stronger against endgame bosses and have reworked most curse mechanics and curse uniques as a result.

Say Goodbye to Archnemesis: The Archnemesis monster mod system has been replaced with a system that more closely resembles Path of Exile's initial monster mods, but with modernised balance and effects.

This system has been streamlined so that each modifier only does one specific thing and describes exactly what it does. While you'll still encounter modifier combinations that get your heart racing, these will be rarer than before and easier to understand in the heat of combat.

We are balancing around having between 2 and 4 mods per rare monster.

Ruthless is an optional new game mode which offers a more challenging way to play Path of Exile. Ruthless players can expect extreme item scarcity, limited crafting and many other changes such as support gems being drop-only.

You can access Ruthless during character creation by selecting it as an additional flag alongside Solo Self-Found and Hardcore.

Maven-witnessed Map Bosses now have a chance to drop an Awakened Gem (inclusive of the Awakened Gems that are typically exclusive to Maven herself).

Map tiers and locations have been shuffled. 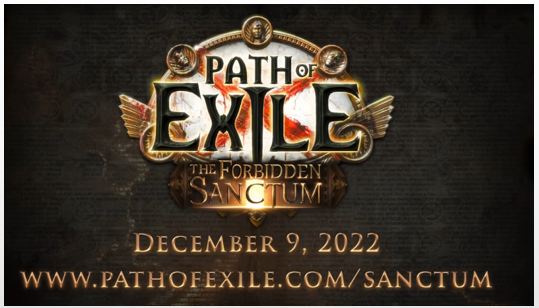