Focused Ballista Support is now offered to the Ranger for completing A Fixture of Fate, and can be purchased from Clarissa by the Duelist, Shadow, and Scion.

Focused Ballista Support, Blastchain Mine Support, High-Impact Mine Support, and Trap Support now apply a 60% damage penalty against players to skills it supports.

Existing Ballista skills in Path of Exile pick their own targets, like sentry guns do. They’ll start shooting immediately and will generally target the closest enemies. While this behaviour is usually great, sometimes you want fine control over what your ballistas will fire at. The Focussed Ballista Support Gem causes your Ballistas to pick the same targets as you and they will only fire when you fire your own ranged weapon. It also makes the ballistas fire a lot faster than they otherwise would. This support gem allows you to effectively focus fire on specific enemies such as bosses. 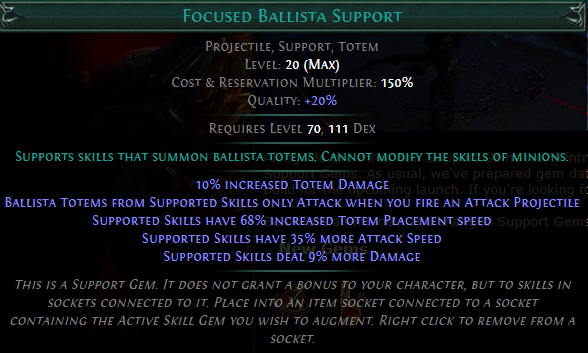