In every area of the game, player encounters the Trialmaster which offers the Trials of Chaos.

In the Ultimatum Challenge League, you'll test your skills in the trials of Chaos. In every area, you'll encounter The Trialmaster who will present you with a reward, objective and choice of three modifiers that add extra challenge to the encounter.

Inscribed Ultimatums which can be placed in the map device to transport you to the Trialmaster's domain. Each Inscribed Ultimatum specifies an offering that you must bring with you, a reward you can earn and an assortment of Ultimatum difficulty modifiers. If you're able to complete the Trial, you'll earn the specified reward. However, if you fail, you'll forfeit the offering you brought with you.

It's worth noting that The Trialmaster (wave 10) can only start showing up at area levels 78 and above.

The completion rate of the Trialmaster encounter is only 60%! Part of this could be attributed to the fact that players may have only fought him a few times and are still learning the encounter as they go, though the Trialmaster is a fairly difficult encounter for most, as many of his abilities can be extremely dangerous, particularly when you factor in map modifiers and Ultimatum modifiers.

64.39% of all generated Trialmaster encounters were never even started. What this means is that players either failed an encounter prior to wave 10, took their rewards prior to wave 10 or didn't start the Ultimatum encounter altogether. When we look at the best case scenario where the Trialmaster spawns 1 time in 50 maps and then factor in the realised encounter rate (35.61%), we see that the average player in level 78 or higher maps is actually fighting the Trialmaster 1 time in 140 maps. Some players have said that they feel the Trialmaster is too rare. Our investigation while generating these stats showed that those players are often not playing through to wave 10, failing encounters, or not even starting the encounter to begin with.

Trialmaster’s Trial: Risk it All

The Trialmaster offers you a reward and a challenge with three difficulty modifiers to choose from. There are four possible objectives: 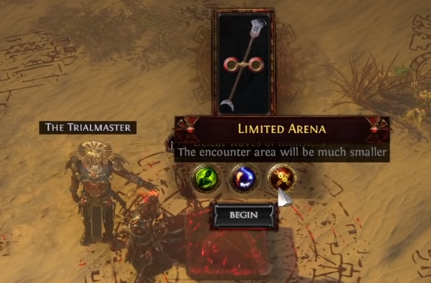 If you succeed in his trial, you may claim your reward. However, you’ll be presented with an Ultimatum: leave with your spoils, or attempt more challenging encounters for more valuable rewards. 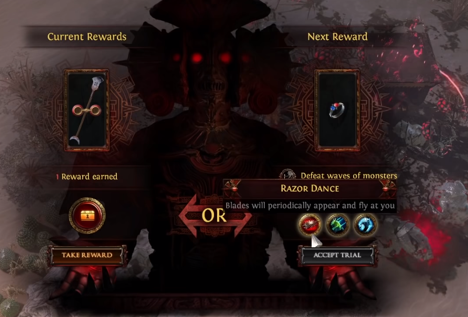 But be careful how many trials you undertake – if you fail, you’ll lose everything you’ve earned so far.

Player need to select a mod to increase the difficulty of the trial, and then perform various Challenge Types. After finish a wave successfully, player can choose to leave the trial with the loot, or enter the next wave. But be careful how many trials you undertake - if you fail, you'll lose everything you've earned so far.

Inscribed Ultimatums indicate an offering you must bring to the Trialmaster’s Domain. If you’re able to succeed at the inscribed challenge, the Trialmaster will reward you with an item of roughly double value. But if you fail, you forfeit the offering that you put on the line. Inscribed Ultimatums come with a challenging assortment of Ultimatum difficulty modifiers and can be traded to other players. 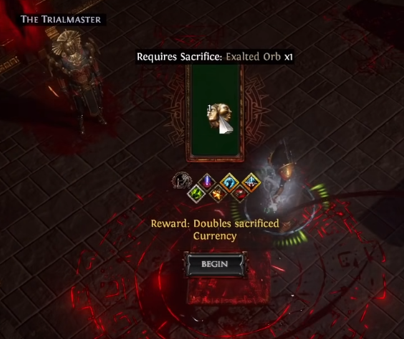 In end-game, The Trialmaster is a combatable boss monster. He can be encountered in the final wave of the Trials by chance.

When facing a Trial of Chaos with other players, each player will be offered their own individual set of rewards. When an individual player fails the trial, they will lose their rewards but the trial will continue with the remaining players.

In between waves, the players will vote on which modifier to add to the next wave. The one with the most votes gets added. In case of ties, a mod is randomly chosen between them. Players have a limited time to vote, but the timer is paused if at least one party member is not present in the zone.

As the difficulty of the Trialmaster’s encounters escalates, so too do the rewards. In addition to some of Path of Exile’s most valuable items, you might be offered new Ultimatum-exclusive Unique items.

PoE has designed Ultimatum league to be very compatible with party play – each player gets their own rewards, can vote on difficulty modifiers and can choose whether they want to risk the next round or not.

PoE 3.14.1: Added a short grace period when being teleported to The Trialmaster's arena. Improved various visual effects in The Trialmaster encounter.