Capture beasts first, then you get a beast crafting recipe, finally go to your menagerie and use the blood altar there. By doing these, you can complete encounter at Bestiary Blood Altar challenge.

Beastcrafting is a method of crafting by sacrificing beasts to the blood altar in the Menagerie. Each beastcrafing recipe requires four beasts to be sacrificed, with most of them requiring one specific Red Beast and three Rare Beasts. The four chosen beasts are released into the arena surrounding the blood altar and must be killed to complete the recipe. If the player dies during the attempt, the recipe fails and the beasts are lost.

If an item is created, the resulting item level is equal to the level of the main beast sacrificed. Recipes that create unique items can generate league-specific uniques.

The table below displays the resulting crafts when sacrificing to the blood altar.

Splitting a rare item into two can turn one or both copies into a magic item depending on the remaining mod count.

How to farm Bestiary Orb?

Bestiary Orb is a PoE currency. It can store a captured beast so the beast can be traded.

Bestiary Orb for one

How to use Bestiary Orb in PoE

Before come to Menagerie, put some

Chaos Orbs in your inventory. 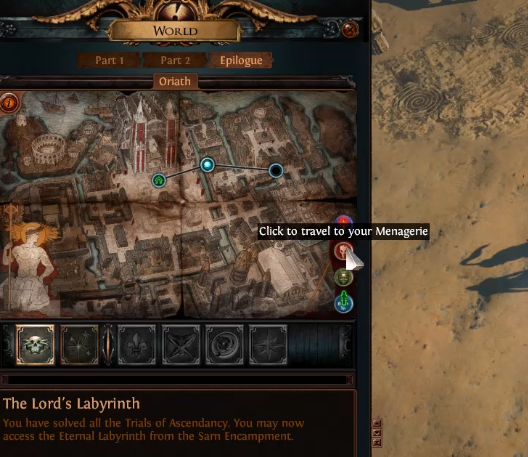 If you do not have the Menagerie icon here, you will have to go to Act 2, and then The Forest Encampment. Talk to Einhar, click "Visit Menagerie". 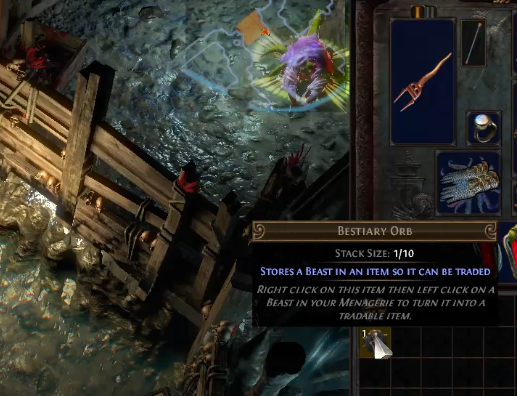 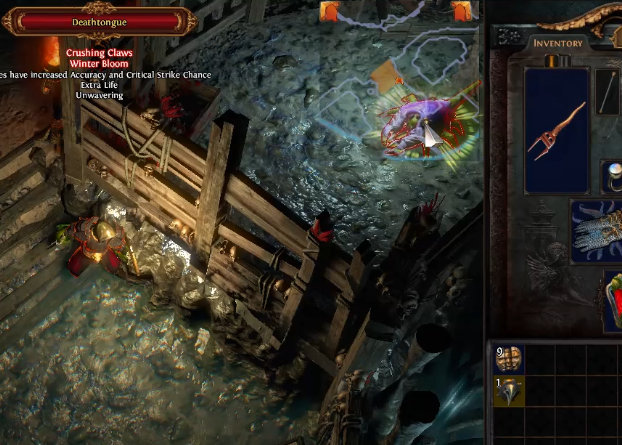 Now, the beast can be traded. 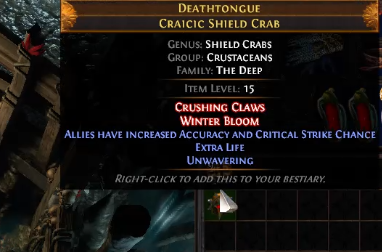 How to let the Beast out

To let the monster out of the item, just right-click it. Adding a beast to your Menagerie this way does not grant progress towards the “Complete the Bestiary” challenge.

The Menagerie is an area. This area has a waypoint and is connected to Menagerie Caverns, Menagerie Depths, Menagerie Sands, and Menagerie Wilds. Each sub-area containing between 9 and 16 pens which hold the collected monsters sorted by monster type. There are 44 pens all up. Each holding pen can hold between 5 monsters (e.g. Amphibians->Gem Frogs) and 56 monsters (Arachnids->Spiders), depending on the pen.

The Menagerie is a place to hold collectable beasts encountered in Wraeclast. The area is open for access once the Einhar's Hunt quest is completed.

Captured beasts end up here. Beasts are captured by Einhar once weakened. The collected beasts can be sacrificed in the Blood Altar for beastcrafting. Einhar sells Bestiary Orb at the Menagerie which can be used to store beasts.

Einhar can also be found in the Menagerie, where you can use captured beasts for beastcrafting. He also sells Bestiary Orbs to itemize beasts for trading.

When a beast is brought to low health, Einhar will appear. He is an invulnerable NPC and attacks with ranged shots, as well as a volley of shots and bombs. He also has an aura that grants life leech and life gain on hit and kill. Einhar will throw a net at weakened beasts, capturing them and moving them to the Menagerie. Beasts cannot be killed.

Once all beasts in the zone are captured, the mission is complete and Einhar will leave the area.

To level up Einhar, capture monsters in the Bestiary:

Capturing monsters that have previously been captured does NOT count towards this. Players can view what they've already captured by opening the Challenge/Achievements Panel (default key "H") and navigating to the "Bestiary" tab.

The end is coming, exile. Of that, I am sure.

When the end arrives, we must be ready. The First Ones will return. They will bring the survivors with them to the Great Grove. We must prove we are worthy. We must sacrifice the beasts we find at the Blood Altar.

Feed the altar the blood of these beasts, and the First Ones will bless us. And, perhaps, reveal to us their secrets.