Inside the Sanctum, you will find gold coins called Aureus, a currency that the Templar used for commerce.

How to get Aureus Coins?

It’s stored in treasure chests and falls from slain monsters.

The Forbidden Sanctum is home to many bosses, including random miniboss encounters, bosses at the end of each floor and an ultimate showdown against the entity that controls the Sanctum. These fights yield valuable rewards including Relics, piles of Aureus coins, masses of experience, new Unique Items and more.

Although these coins belong to the Sanctum and will not leave with you, they can be traded with a merchant who you may encounter from time to time. Spend your Aureus wisely as it can be used to purchase a crucial boon when the time is right.

The Sanctum’s rooms hold many secrets. Some contain ancient fountains you can rest at to restore a portion of your resolve. Others will curse you with an affliction, hindering your progress. These afflictions stack up as you explore deeper and deeper within the Sanctum. You can also receive boons, blessings that help you overcome the Sanctum’s dangers. Each time you enter the Sanctum, you will encounter a unique layout that you must assess and adapt to as you explore. 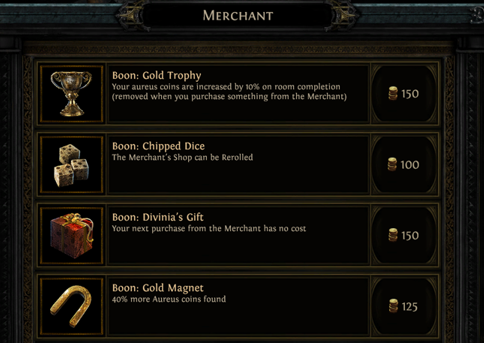 What happens if I crash while in The Forbidden Sanctum?

When you play your next map you'll be able to replay the same room you were up to. Aureus coins and rewards are only locked in upon successful completion of a room.

3.20.0b Patch Notes: The pickup range of Aureus Coins has been increased, and you're now able to pick them up slightly sooner after they drop.