Celebrate the New Year by preparing for the upcoming All-Star game with Chicago Bulls guard Zach LaVine. Chase Legend status and all new rewards in Season 4!

When Zach LaVine takes flight, it’s like watching a rocket burst into the atmosphere, streaking toward the stars. Through the years, LaVine has proven to be more than just a Slam Dunk Contest Champion, maturing into a bonafide All-Star, and now Season 4’s featured hero. Headlined by LaVine and his meteoric talent, Season 4 of NBA 2K23 features a star-studded ensemble of rewards and content available on New Gen and Current Gen consoles. With the holidays in the rearview mirror, it’s time to shift our focus ahead to the All-Star game, which takes place February 19, 2023. Prepare for the superstar showdown by chasing All-Star caliber rewards in The City and on The G.O.A.T. Boat! 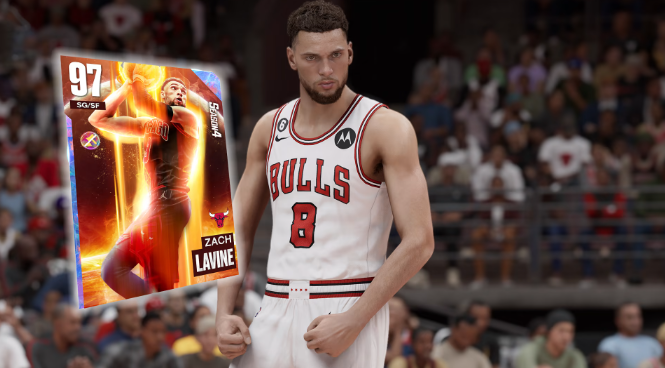 In MyTEAM, Galaxy Opal Zach LaVine lands as the Level 40 reward for Season 4. To reach him, complete Agendas and earn XP in MyTEAM’s modes to climb your way towards this high-flying and dominant back-to-back All-Star. Getting you started on your Season path to Level 40 is the other half of the current Bulls’ star tandem, DeMar DeRozan. Pick up this All-Star swing as a 95 overall Free Agent card by entering the Season menu in MyTEAM to redeem this Level 1 reward.

Zach LaVine also brings a new Signature Challenge along with him to MyTEAM. Take on Zach and his hand-picked all-time Bulls with Derrick Rose, Joakim Noah, Scottie Pippen, and NBA 2K23 Cover Athlete Michael Jordan! The rewards for beating this squad will improve any lineup with a Hall of Fame Badge, Diamond Shoe Colorway, and Shoe Boosts to improve your favorite player card in the MT Shoe Lab.