Inspiration Charges are granted from

Inspiration Support. It does not state in the gem text, but the player can only have 5 charges. Currently there is no way to increase this cap.

When the supported skill is used, it grants an Inspiration charge, which grants more elemental damage and critical strike chance. You lose all Inspiration Charges after you spend a certain amount of mana.

Supported skills grant you an Inspiration Charge when you spend mana with them, up to 5 charges. These charges last for 10 seconds. If you haven’t generated a charge for longer, you will lose all Inspiration Charges.

This creates a mana counter for all skills linked with

Inspiration Support, up to the respective cap.

As soon as a skill is used that puts the total mana spent above the threshold, the mana counter is reset to 0 and all Inspiration Charges are removed.

Hence lower mana costs result in better usage of Inspiration Charges. For example, if it takes 100 mana to cast a skill, the first 5 casts will average at 50% of the gem’s potential and then the next 3 casts will be at 100% potential, while a mana cost of 1 will result in 795 casts at maximum efficiency after the first 5 initial casts.

Inspiration Support. It doesn’t matter which skill created the charges, each skill linked to this support will benefit from the charges even if it doesn’t use mana.

Cast On Critical Strike Support – Since attacks usually cost much less mana to use than spells, especially

Cyclone, it results in more efficient use of

Inspiration Support. Both the attack and spell(s) in a common Cast On Critical Strike set-up will be supported, granting increased critical strike chance and more elemental damage to both.

Increased Critical Strikes Support, etc.). Supporting both an attack like

Shield Charge, which has a low mana cost, and the Heralds with

Inspiration Support, it is possible to generate charges with the attack and having

Righteous Fire benefit from the buff.

Weave the Arcane (and other ways to reduce the mana cost of skills to 0) can be used to bypass the mana counter. However Inspiration Charges will be lost if no mana is spent by supported skills within the 10 seconds the charges last.

Mines, which reserve mana and have a low mana cost, can benefit as well and with the right set-up maintain the buff consistently. Similarly Brands can link the main brand-skill,

Brand Recall and a movement skill to keep the buff active. Builds that use Ignite as their main damage source can use the “more elemental damage” multiplier to scale both the initial hit and the ailment.

So while this gem doesn’t have the highest more-multiplier, the downside of generating and maintaining charges can be easily managed while other support gems come at a steep opportunity cost such as reducing critical strike chance with

Controlled Destruction Support or being unable to inflict elemental ailments with 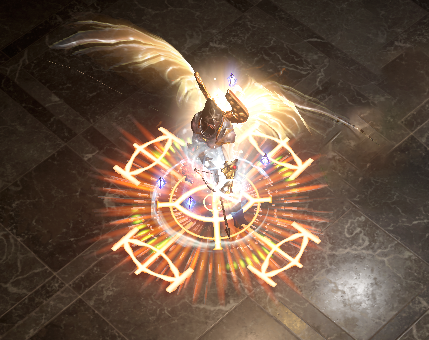