HP is your Health Points or Hit Points, and it has also been called Life, is an important stat in FFXIV. As you take damage, your HP will decrease. You die when your HP reaches 0. After you die, you must be resurrected via raise by another player or return to your Home Point.

HP is determined not only by the player’s discipline and level, but is also affected by Vitality, including vitality gained by equipment.

How to Restore HP

There are many abilities that restore HP, but it is mostly typically healed by the spell Cure or the item Potion, or a stronger version of either one. The spell Regen slowly restores HP. HP will regenerate rapidly outside of battle and very slowly during battle.

Potion is a medicine consumable that will restore some HP upon use.

As the example shown below, the Potion restores up to 32% of HP(160 points max). This weak concoction instantly restores a small amount of HP. 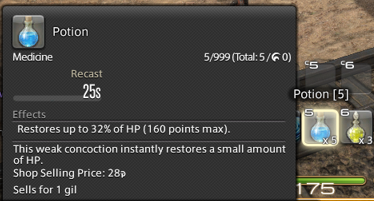 You can purchase Potion from shop. The following is an example. Choose "Purchase items", then select number and buy. The price of Potion is 28 Gil.

Cure is the most basic of White Magic spells and restores a small amount of HP.

Cure is a Conjurer and White Mage spell available at level 2. The spell restores HP to a single party member with a potency of 450.

Players can learn three additional traits that allow their Cure casts to occasionally give additional effects. The first trait the player learns is the Freecure trait at Conjurer level 32, which allows the player to now have a 15% chance that after casting Cure, the MP cost for their next Cure II will be free. The second trait the player learns is the Secret of the Lily trait at White Mage level 52, which now allows the player’s Cure casts to have a 100% chance of adding a Lily to their Healing Gauge while in combat. Lastly, once the player learns the Secret of the Lily II trait as a level 68 White Mage, they now have a 20% chance to lower the recast times of certain abilities by 5 seconds whenever they heal a party member critical HP with their Cure spells.

From the initial relaunch through Final Fantasy XIV: Heavensward, Cure had a healing potency of 400 and was available as a cross class spell for all default classes, the Scholar, and the Paladin. After the release of Final Fantasy XIV: Stormblood, the cross class system was removed and Cure became a Conjurer and White Mage exclusive ability.

Vercure is a Level 54 Red Mage, it has cure potency of 350, it can trigger the dualcast effect, it doesn’t increase white mana or black mana.

Pom Cure is Blue Mage spell with a healing potency of 100 (the potency is increased to 500 when under the effect of Aetherial Mimicry: Healer), it costs 200 MP to use, and can be acquired on the level 50 trial Thornmarch.

Certain enemies can also use cure and variations of it, it can normally be silenced via the actions interject, headgraze or a stun.