Defeat Sallazzang in Gardens Map without being affected by Suppressing Fire

PoE Challenge: Defeat Sallazzang in Gardens Map without being affected by Suppressing Fire.

Sallazzang is a unique Plumed Chimeral located in Gardens Map.

Suppressing Fire is a debuff applied on hit by the  Barrage attack of Plumed Chimerals. It slows the cast and ranged attack speeds of the affected target. 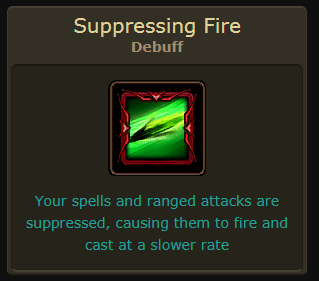 The layout is similar to the Imperial Gardens (or the removed area The Hedge Maze) of Act 3, as well as some areas of The Lord’s Labyrinth.

The boss has a separate boss room in rectangular shape. The arena is a patio with an inner square surrounded by columns. There is a pool in the middle. Similar to Yugul, Reflection of Terror boss encounter of Act 8, the boss may retreated to the pool temporarily. Also similar to the boss fight of Ryslatha, the Puppet Mistress of Act 6, the boss room has pots that spawn adds.

Corners provide cover from enemies, while the edges of the square consist of railings that can be shot over. Each edge has at least one passage between the inner and the outer part of the arena.