Splinter of Chayula is a currency item obtained by defeating monsters, opening special chests or damaging Chayula inside of a Breach. It can be combined with other splinters to form Chayula’s Breachstone. 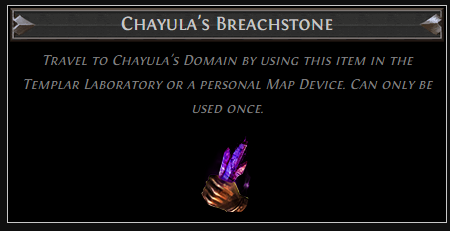 Chayula’s Domain is an area that is only accessible when Chayula’s Breachstone is used in a map device.

The area has a single breach at the beginning. When you touch it a countdown starts at 25 seconds and runs down until you come close to the arena of the Breachlord Chayula. The countdown goes up by 1 second per kill.

One of the following unique items can drop from him:

Additionally, there is a chance for him to also drop a

Blessing of Chayula which can be used to upgrade his unique items.

He also has the chance of dropping the divination card The Undisputed.

Note: despite of the name,

Eye of Chayula can also be obtained from monsters other than Chayula. It is a regular unique item.