Boneshatter strikes enemies with a forceful blow. If this attack stuns an enemy, it releases a powerful shockwave with area based on the stun’s duration. As you use Boneshatter more, it deals more and more damage to enemies and to yourself.

There is about 0.6% of Path of Exile players use this gem as the main damage skill. Among those players, 85% are Juggernaut.

For a Level 94 Juggernaut, the physical DPS is about 340K.

For attributes and defensive, here is an example of a Level 94 Juggernaut character:

This is a new melee skill released in Expedition League to wreak havoc in Wraeclast. I wanted it to have a really satisfying gritty sound each time you hit, rather than just a big impact. I took the Boneshatter name as inspiration and went full ‘ASMR’' on that bone cracking. The main impact sound was made from a mix of bullet and hammered wall impacts with rocks, marble, celery, styrofoam and rupture sounds. The charge up was a buzzing, spark, energy mix. And the shockwave was made with wind and dirt movements, focusing on the high end to be less present and leave more space in the lows and mids for the impact to be really felt.

Is Boneshatter bugged? It looks like its shockwave doesn't trigger sometimes.

The short answer is no. There are some mechanical shortfalls of the way Stun currently works. GGG has plans to improve how this works in the future but it most likely won't happen during 3.15's patch series. GGG has also seen reports that Boneshatter's weapon range isn't scaling correctly. GGG has investigated this and found that it is scaling correctly but the visual representation of it isn't clear enough.

Boneshatter are now offered to the Marauder for completing Sever the Right Hand, and can be purchased from Clarissa by the Templar, Duelist and Scion.

Boneshatter strikes your enemies with a forceful blow. If an enemy is stunned by this attack, a powerful shockwave is released. The area of effect of the shockwave is determined by the duration of the stun you inflicted.

Each time you use

Boneshatter against an enemy, you take physical damage and gain a Trauma stack. The more stacks you have, the more damage

Boneshatter will deal to both you and your enemies. This self-damage mechanic makes the Juggernaut the ideal class for this skill because they have easy access to lots of armour to mitigate the downside. Also, the Juggernaut has Ascendancy passives that grant increased stun duration which help make sure the shockwave is as large as possible. 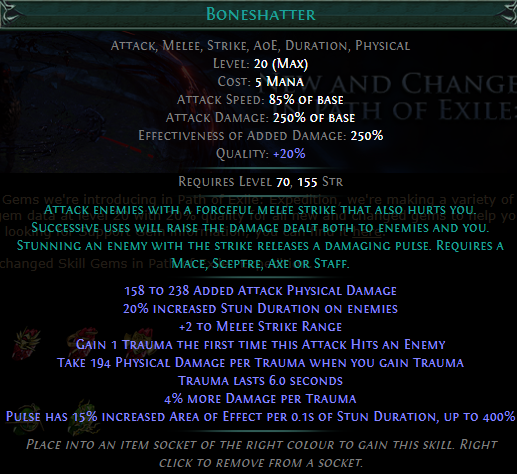